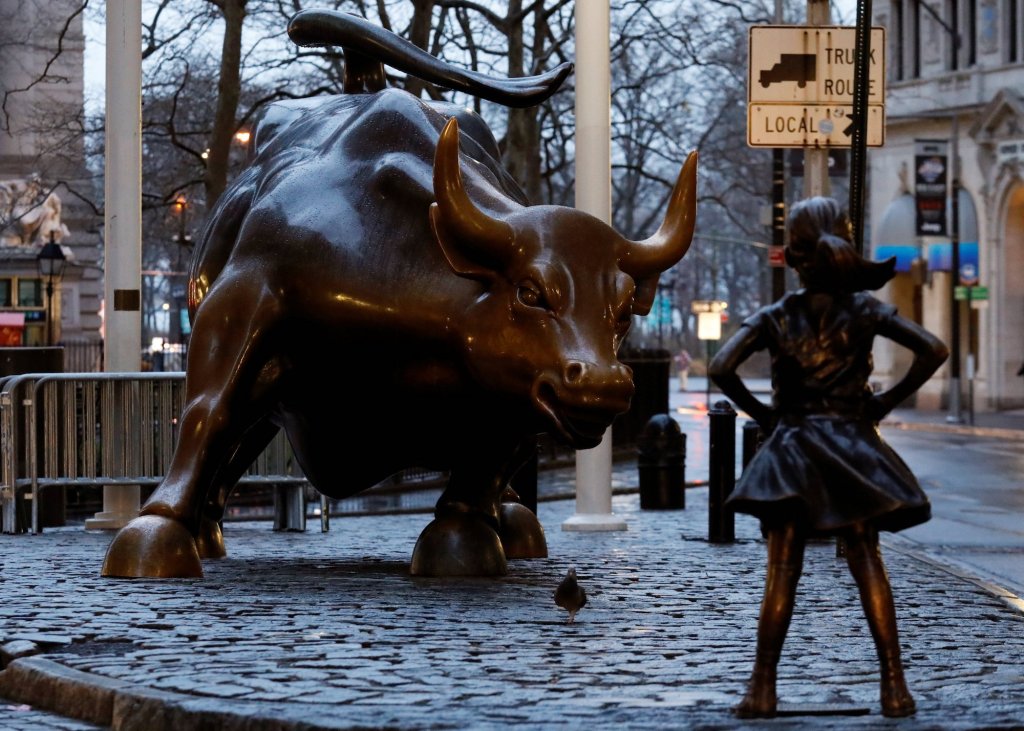 Wall Street visitors and tourists will notice a new addition if they’re walking down Broadway in New York this week. About 20 feet across from the famous Charging Bull statue — a symbol of Wall Street’s strength and might that has loomed over the street since 1989 — a bronze statue of a girl stands facing it, hands on hip, a defiant expression carved into her face.

The temporary statue, placed by McCann New York advertising agency and its client, Boston-based State Street Global Advisors, may be a stunt to draw attention to the index fund giant’s campaign to get more women into board roles against the backdrop of International Women’s Day and the anniversary of the launch of an exchange-traded fund that tracks companies that have higher levels of gender diversity in its leadership. It has a permit for the statue to remain for a week — the firm is trying to extend it to a month, according to a firm spokesman — and a plaque in front of the girl says “SHE makes a difference,” a reference to the ticker for the exchange-traded fund.

But the campaign ploy is also backed up by an actual threat from the big money manager, which has nearly $2.5 trillion in investments under management: If directors aren’t making tangible progress toward adding women to their board, they’ll vote their shares against them.

State Street is vowing that it will now vote its shares in the 3,500 public companies in which it invests — the money manager is among the largest index fund providers and often holds sizable stakes in its companies — against nominating committee members, or the directors who select the members of boards, if the company has no female directors or cannot show tangible progress toward trying to improve their diversity.

“As a large index provider, we have to be invested in these companies,” said Lori Heinel, the deputy global chief investment officer for State Street, in an interview. “The best thing we can do is be more activist in those companies to improve their performance as a long-term provider of capital.” The effort was first reported by The Wall Street Journal.

She notes the “wide body of evidence” that companies with more diverse boards of directors tend to perform better. Research has shown, for example, that companies with female directors perform better on measures such as return on equity, average growth, price/book value multiples, as well as offering higher profit margins and better priced mergers.

“This is the first time we’re really putting a stake in the ground to say this is an issue that’s meaningful to us,” she said. While State Street will not automatically vote against directors who choose board members at companies that have no women at the top, it will require them to show substantial efforts toward diversity — adding candidates from other minority backgrounds, say, or proving they’ve reached out to other search firms or networks to broaden their slate.

Data from corporate governance data firm Equilar shows that nearly 25 percent of companies in the Russell 3000 index, meant to be a benchmark of the entire U.S. stock market, have no female membership. Though few of the very largest companies have no women on the board, the issue is more common among smaller companies.

Advocates for gender parity applauded the move. “I feel like every other month a new study comes out that makes the case for gender diversity in corporate leadership,” said Brande Stellings, vice president of corporate board services for Catalyst, the nonprofit research firm. “But clearly the business case is not providing the motivation. To see important players like State Street say we’re going to be looking at this, and we’re going to be holding you accountable — I think that’s a significant development.”

Natasha Lamb, director of equity research and shareholder engagement for Arjuna Capital, who has pushed companies to disclose their gender pay gap in shareholder proposals, said, “I’ve never seen an asset owner of this size step up on diversity like State Street has.” Lamb, who has pushed companies to report on their gender pay gap through shareholder proposals, says, “this is a remarkable evolution for Wall Street, which has been such a male-dominated field.”

She says that while the bar — adding at least one woman or demonstrating real progress toward it — may not be that high, “there’s got to be a carrot and a stick. If the companies don’t act — let’s say State Street gives them the benefit of the doubt for a year — and they come back and no progress has been made, I expect they will vote against the nominating committee. You can’t force your agenda, but they have a loud voice.”

Heinel points to State Street’s own record at voting against companies where they had concerns about director tenure as evidence that the money manager is willing to follow through on its newer gender initiative. Heinel says the firm voted against management 380 times in 2015 over concerns that not enough was being done to refresh the faces of people at the top.

She says that one female member on the board is not enough. “The broader prize here is we want more equity, more diverse boards that will deliver better shareholder performance,” Heinel says. “We’re not going to stop at one.”