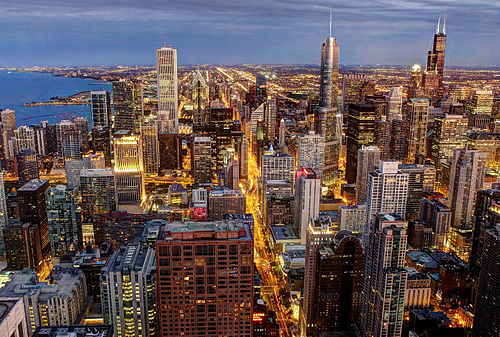 Illinois just can’t catch a break. The state is home to 67 of the 1,000 biggest companies in the U.S. by revenue—fourth most among states. They include Boeing, Abbott Labs, Caterpillar and Kraft Foods. However, the net migration rate out of Illinois over the last five years is the worst in the U.S.

The state’s finances are also in shambles: in June 2016, Moody’s downgraded Illinois’ credit rating to Baa2—lowest in the country among the states—and maintained its negative outlook. Moody’s cited the state’s “continuing budget imbalance due to political gridlock.” It was the fourth downgrade since 2012.

United Airlines is laying off about 300 management positions at its Willis Tower headquarters as part of a restructuring.

United CEO Oscar Munoz said in January that “a relatively small number” of jobs would be cut to reduce redundancy, but the number of layoffs wasn’t clear until the state’s monthly report of mass layoffs was published Tuesday.

United spokesman Megan McCarthy said 300 is small, given the 87,000 people United employs. None of the reductions are among front-line staff at the airports.

“It’s part of work we were doing to be a more efficient, nimble organization,” McCarthy said. Most of the layoffs already have occurred but they will continue through the end of May, she said.

The United layoffs were among 982 job cuts that Illinois employers reported to the Illinois Department of Commerce and Economic Opportunity in February. The Illinois Worker Adjustment and Retraining Notification Act requires employers with at least 75 employees to notify the state 60 days in advance of plant closures or layoffs.

•Sears Holdings listed 120 layoffs. The Hoffman Estates-based retail giant, which owns Sears and Kmart, said last month that it laid off 130 corporate employees, most at its headquarters, as part of a restructuring plan aimed at cutting at least $1 billion in costs this year.

•Marbles the Brain Store listed 40 layoffs. The puzzle and game seller filed for Chapter 11 bankruptcy last month with the intent of closing its 37 stores, including five in Illinois. The company, founded in 2008, has 333 employees overall. The layoffs in the notice, which listed the address of Marbles’ corporate headquarters in Chicago’s Logan Square neighborhood, began Jan. 9 and are to conclude March 31.

•Recycled Paper Greetings listed 64 layoffs. The greeting card company, founded in 1971 and headquartered in the West Loop, is closing the Chicago office as it moves its Papyrus-Recycled Greetings headquarters to a new facility in Napa Valley, Calif., in anticipation of future growth demands, said Patrice Sadd, a spokeswoman for parent company American Greetings. The Chicago office will close April 30. Recycled Paper, one of the first greeting card companies to rely on recycled materials, was bought by Cleveland-based American Greetings in 2009.

•U.S. Smokeless Tobacco listed 246 layoffs at its Franklin Park manufacturing plant. The plant, which makes Skoal, Copenhagen and other smokeless tobacco products, is closing as the company moves production to the company’s facility in Nashville, Tenn., said David Sutton, spokesman for Altria Group, the Richmond, Va.-based parent company that also owns Philip Morris. Layoffs were scheduled to occur between April 28 and May 12. The company, which announced the facility’s closure in October, negotiated severance and other separation benefits with union-represented employees, while salaried and nonunion full-time workers will get at least six months of pay, as well as benefits and free job training, Sutton said. The company has manufactured products at the Franklin Park site since 1974.

Illinois is in trouble. And it won’t be getting help from the federal government, because when the Republicans trash the Affordable Care Act (Obamacare), thousands of people will lose their insurance, mostly those  elderly and sick, which the state will have to deal with, or pay to bury.