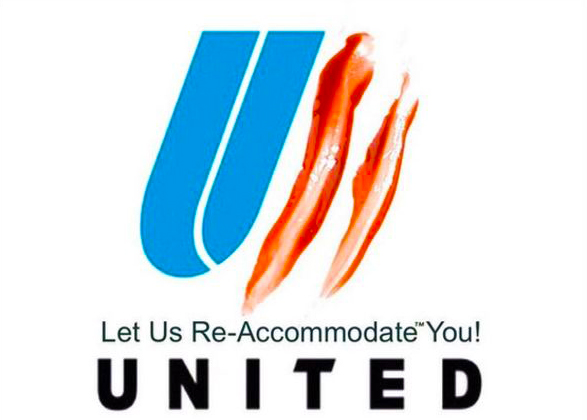 In light of recent events, the crack management team at United Airlines decided they needed to freshen up the companies image. Especially now that the airline is known worldwide for roughing up its passengers, the powers at UA decided at image change was necessary.

America’s third biggest carrier is being slammed online for violently dragging a passenger – a 69-year-old Asian man, believed to be a doctor – off an overbooked flight.

This comes just weeks after the company, whose slogan is “Fly the Friendly Skies”, was ridiculed for refusing to allow two teenage girls to board a flight because they were wearing leggings.

Chief executive Oscar Munoz added more fuel to the fire with his response, which didn’t mention the use of force. “This is an upsetting event to all of us here at United. I apologize for having to re-accommodate these customers,” he said in a statement.

From the brutality of the man’s removal, to the CEO’s response, which contradicted itself and was essentially a non-apology – it’s truly difficult to see what United Airlines’ communications strategy is hoping to achieve, or whether they have one at all.