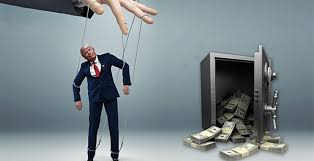 Actually, Trump owes the German bank over $1 billion, if you add up the various entities. Trump currently has two loans and two mortgages with Deutsche Bank and owes it about $340m (£270m).

The bank has also extended another $950m to a venture in which Trump owns a 30% stake, the Wall Street Journal reported in January. The debts of President Donald Trump and his businesses are scattered across Wall Street banks, mutual funds and other financial institutions, broadening the tangle of conflicts of interest.

Germany’s biggest bank is coming under pressure from a US senator to give further details of its lending to Donald Trump and meetings it has had with the administration.

Chris Van Hollen has written to Deutsche Bank asking for assurances that it will not use the president’s outstanding multimillion-dollar loans as “leverage”. The Democratic senator is also demanding to know whether the bank has restructured Trump’s debt or sold it to “foreign entities”.

Van Hollen, who sits on the Senate banking committee, said he had “great concern” about possible conflicts of interest between Deutsche and Trump and questions about whether the bank’s role as the president’s largest creditor could influence multiple ongoing investigations into the German bank.

In a letter to Bill Woodley, the CEO of Deutsche Bank America, the senator wrote: “I am asking that you do not use your institution’s ties to President Trump as leverage in any of these ongoing cases or ongoing regulatory oversight.

“Further, I ask that Deutsche Bank and its executives do not take any actions to assist Mr Trump in circumventing any of his ethical obligations to avoid conflicts of interest.”

Deutsche Bank says its position is that it will not comment or guide on any stories about Trump’s financial affairs.