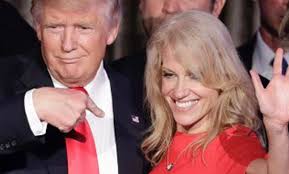 White House counselor Kellyanne Conway insisted on Sunday that the Senate health care bill would not make cuts to Medicaid, regardless of projections that suggest the program will be cut by over $800 billion.

“These are not cuts to Medicaid,” Conway told George Stephanopoulos on ABC’s “This Week.”

Senate Republicans unveiled their plan to repeal and replace the Affordable Care Act last Thursday, and the bill stands to substantially roll back expansions to Medicaid under landmark Obama-era legislation, as well as “end the law’s mandate that most Americans have health insurance,” according to the New York Times.

President Donald Trump promised during his campaign that he would “save Medicare, Medicaid and Social Security without cuts.” Despite the Senate health care bill proposing otherwise, Conway argued that the president was not walking back on his promises.

“Medicaid’s imperative, its founding was meant to help the poor, the sick, the needy, the disabled, children, some elderly, women, particularly pregnant women,” Conway said. “We are trying to get Medicaid back to its original moorings.”

Stephanopoulos pointed out that experts and even Republican senators have said that the bill plans to slash Medicaid, but according to Conway “a four letter word called will” is more important than providing adequate funds. When Stephanopoulos said to Conway that Trump’s rhetoric on the nation’s opioid epidemic can’t be expanded or properly fought with the current cuts to Medicaid, she insisted otherwise.

“I would point out that President Obama, through ObamaCare and elsewise, poured money into crises like this and where are we?” She asked. “And so pouring money into the problem is not only answer. We have to get serious about in-facility treatment and recovery,” Conway argued.

Conway insisted that cutting funds could still solve the problem. “It takes money and it also takes a four letter word called will. It takes the focus that it includes money, but it also includes understanding the difference between just interdiction and prevention, but, also recovery and treatment.”