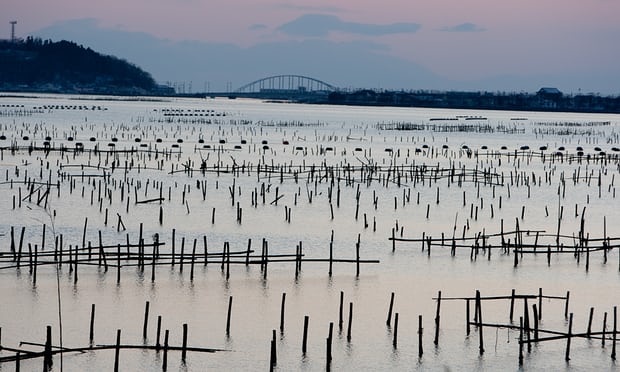 Michael Graham reaches into a bright blue tub of bubbling water and pulls out a handful of a dark brown curly substance. It’s slippery to the touch, smells like the sea, and tastes a bit like salty kale.

It’s live seaweed, and Graham – a kelp biologist and the creator of Monterey Bay Seaweeds – has been farming the stuff on a small scale in these big tanks in Moss Landing on the central coast of California for close to two years. Using more than a dozen of these big tubs and a couple of larger tanks, he produces between 50 and 100lbs of seaweed per week.

Graham, along with his wife and seven children, grow and sell their seaweed to upscale restaurants in Monterey and the San Francisco Bay Area, such as Farallon and Hog Island Oyster Company. He routinely walks into the back of these restaurants in shorts and flip-flops and hands over the live seaweed in bags of seawater to his chef customers, who use it to accompany shellfish dishes or as a sprig in a bloody mary.

Graham is part of a growing group of entrepreneurs looking to build businesses around farming seaweed, long-prized in Asian countries for its nutritional value, high-protein content and health benefits. But in contrast to many of the sprawling farms in China, these entrepreneurs are looking to create new business models, farming methods, technologies and designs that incorporate environmental sustainability and ocean biodiversity.

“This is like a backyard farm where you can sell your goods at a farmer’s market,” says Graham, gesturing to his farm a few feet from the sea and next to the Moss Landing Marine Labs, where he’s a professor in the California State University system. The only things that go into the tubs are seaweed, seawater and sunlight.

Much of the world’s seaweed is produced in large sea-based farms off the coasts of China, Indonesia, the Philippines, South Korea and Japan. This seaweed is largely dried (or sometimes blanched) and used for food, animal feed and industrial applications such as thickeners for making toothpaste. Those sushi wraps on your California roll? They most likely come from farms in Asia.

As the world population grows, and the climate changes, there’s been increased interest from nonprofits, businesses and development organizations to use algaes for food and energy. Seaweed, which can grow rapidly and efficiently, provides plant-based proteins and shows promise as a source of biofuel to replace fossil fuels. Its ability to absorb carbon dioxide, nitrogen and phosphorus also make it a living vacuum to clean up polluting chemicals discharged by farms, factories and wastewater treatment plants.

A 2016 report from the World Bank estimates that the annual global seaweed production could reach 500m dry tons by 2050 if the market is able to increase its harvest 14% per year. Hitting that 500m mark would boost the world’s food supply by 10% from the current level, create 50 million direct jobs in the process and, as a biofuel, replace about 1.5% of the fossil fuels used to run vehicles.

Large production of seaweed for food, animal feed and biofuels “could represent a transformational change in the global food security equation and in the way we view and use the oceans,” says the report.

Seaweed farming on the west coast of the US is almost non-existent, but more than a dozen have been created on the east coast in recent years. Europe’s got its own budding seaweed farming entrepreneurs as well.

Unlike Graham’s farm, almost all other seaweed farms operate in waters offshore. About 250 miles south of Graham’s farm, near Santa Barbara, Daniel Marquez stands on a cliff above a rocky beach and points out to a 25-acre plot of seascape where he and his wife, Antoinette, intend to farm seaweed through an open-sea system. Next to the ocean plot, a pod of dolphins swim by, and overhead flock after flock of pelicans fly.

Marquez plans to farm seaweed to make beauty products created by Antoinette and sold through their shop, Ama SeaBeauty, in downtown Santa Barbara. They currently harvest seaweed from the wild. After taking over the plot’s lease and state permit from the previous owner more than a year ago, Marquez has been waiting for the California department of fish and wildlife to transfer the lease and permit into his name so that he can start commercial production. It’s unclear when the state will get that done.

As a fourth-generation Santa Barbara native, Marquez says there used to be a naturally occurring kelp forest that ran along the west coast “the size of the 101 freeway”. The forest disappeared because of an unusually warm water temperature that accompanied severe winter storms.

“I want to see that system come back to life,” says Marquez.

Marquez is among a network of seaweed farmers, mostly on the east coast, who are advocates of using a system called 3D ocean farming, which grows seaweed and shellfish together on long vertical floating ropes. The model is designed to use space efficiently by growing crops that occupy the entire vertical water column. Most of the sprawling Asian farms use the upper part of the water column and only growing one kind of seaweed.

The blueprint for 3D ocean farming can grow 10 tons of seaweed and 150,000 shellfish on an acre per year. Growing seaweed this way requires little maintenance, little feed and no fertilizers, says its designer, Bren Smith, a seaweed farmer in Connecticut. He founded nonprofit co-op GreenWave and gives away his design, which won prestigious Buckminster Fuller Institute, for free.

“We’re all about polyculture [multiple crops], so that you diversify risk for the ocean farmer, and it’s better for the ecosystem,” says Smith.

There’s a major startup cost for creating the farm, however. For around $20,000 and a boat (which can greatly vary in price), farmers can get up and running and start out putting seaweed lines in the water. GreenWave estimates that a farmer could generate around $37,000 in profit per year by producing 10 tons of kelp and 150,000 shellfish per acre.

The GreenWave network has 10 farmers today, and Smith says he aims to increase the membership to 25 by next year. Marquez designed GreenWave’s seaweed hatchery, and he’s the first west coast farmer to belong to GreenWave’s farming network.

Through GreenWave, farmers get training and education, two years of consulting help, aid with permits from pro bono lawyers, free seed and a commitment from GreenWave’s customers to buy up to 80% of their seaweed harvests. GreenWave sells its fresh seaweed (not dried) to corporate customers such as Patagonia and Google.

Growing seaweed comes with potentially significant environmental impacts. Converting plots into working farms could disrupt the habitats of wildlife and deplete naturally occurring nutrients, though more research is necessary to understand the scope of the issues. Securing farming permits in states with stricter environmental conservation laws, such as California, can be a lengthy process. In Asia, seaweed farmers jockey inshore for space to build expansive farms. Environmentalists are also concerned that farms that grow only one crop risk big financial losses if the crop becomes susceptible to disease.

Graham decided not to do open-water seaweed farming partly because of the long wait times for California permits and the costs of operating a boat to harvest the seaweed. Graham and his wife both are keeping their other, full-time jobs, and he says the venture is just “barely in the black”.

Still, California is home to many aspiring seaweed growers. GreenWave has received letters from more than a hundred people about farming seaweed in the golden state.

From Smith’s perspective, it’s not an option of whether or not the world should embrace and boost seaweed farming for food production. He says: “If climate change is as bad as we think it will be, I don’t see how we can’t do this.”