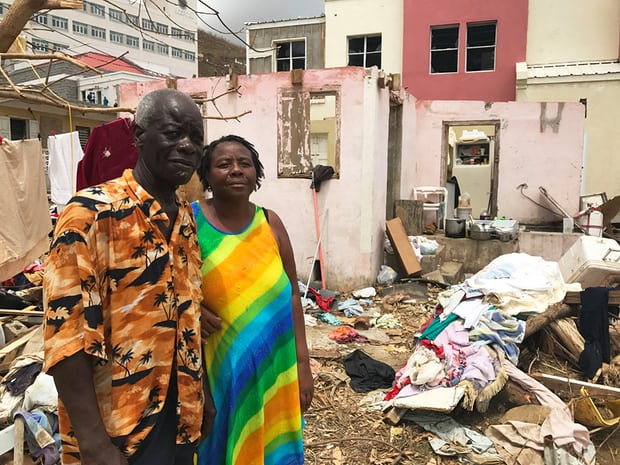 “Thank God for life” is a common everyday expression on Tortola, the largest of the British Virgin Islands. But since Hurricane Irma smashed through the lush green landscape of the tiny British Caribbean territory less than two weeks ago, leaving at least five people dead, it has become a mantra. But other islands, notably poorer, have received less media attention.

As the scale of the devastation has become clear, the islands are now bracing for another battering, this time from tropical storm Maria later this week, which appears to be following Irma’s path.

In the meantime, a patchwork combination of the hard work of local residents, private aid from the tax haven’s myriad wealthy financial services companies and assistance from British troops will continue to help the islands find their feet.

For their 30,000 residents, it is clear the road to recovery will be long – and expensive. “Absolutely hellish,” is how Boris Johnson described the devastation when he flew in last week for a one-day show of British commitment to the islanders.

“I’ve never seen anything like it,” the foreign secretary told his press entourage as he toured communities now almost submerged in piles of rubble, twisted galvanized roofing, broken trees, glass and household items. Up to 80% of the islands’ buildings have been damaged or destroyed.

More than 900 British troops have been helping local and Caribbean forces maintain order on the streets and clear roads. Shops were looted and up to 120 prisoners escaped after the prison building lost its roof and fencing during Irma. Local police, with the help of the heavily armed UK forces, have now rounded up almost all of the prisoners while some have returned voluntarily, according to the island’s police commissioner, Michael Matthews.

For their size, the British Virgin Islands are exceptionally well connected, with Sir Richard Branson and Google’s Larry Page among the most high-profile residents. Buildings on their private islands – Branson owns two, Necker and Mosquito islands, while Page owns nearby Eustacia – were destroyed, as were almost all buildings on the bigger adjacent island, Virgin Gorda.

In the immediate aftermath of the storm, both billionaires flew their staff to safety and began organizing shipments of supplies to the communities of Virgin Gorda and the other islands. Branson’s son Sam has set up a food distribution centre in the North Sound area of Virgin Gorda, while the international charity Virgin Unite has been coordinating shipments of supplies and organizing evacuations.

Some islands were hit even worse.

Take Barbuda. The ferocious storm “extinguished” the isle’s way of life and left the beautiful spot “uninhabitable.” And, now, for the first time in a few centuries, no one lives there.

“The damage is complete,” Ronald Sanders, the Antigua and Barbuda ambassador to the United States, told Public Radio International. “It’s a humanitarian disaster. For the first time in 300 years, there’s not a single living person on the island of Barbuda — a civilization that has existed in that island for over 300 years has now been extinguished.”
Notice how much press was concerning the residents in the relatively well off British Virgin Islands, and how little is given to the plight of the people that lived in the poorer islands. One look at the photo that accompanies this story, and you’ll see why.