Following the devastating Category 5 Hurricane Irma and now powerful Hurricane Maria, many travelers are concerned about their future holiday plans and what the effect has had at their favorite resorts.

Belmond Cap Juluca-Was closed for the season and had no major structural damage. The resort was already in the process of a remodel and will not open until November 2018.

Resort Hotels Carimar Beach Club- Management and staff are fine and Carimar is standing strong. The garden looks the worst and a few doors and windows are damaged. The team has started the clean-up process and will advise of their reopening date, now that Jose has passed.

CeBlue Villas & Beach Resort-CeBlue’s staff is safe and the resort had no guests as it was already closed for the season. The villas and resort buildings held up strongly against the hurricane and they are all structurally sound. The resort has begun the cleanup process as the damages sustained are repairable.

CuisinArt Golf Resort & Spa and The Reef by CuisinArt- This property was significantly affected, and their engineers are presently assessing the full extent of the damage. The ownership and management are committed to restoring, rebuilding and reopening, as well as doing everything possible to help and support their employees.

Fountain Anguilla- The Fountain buildings and grounds are structurally intact. A few of the units suffered some damage from debris hitting the windows and they are currently assessing the clean-up and repair. They anticipate being open for the season.

Four Seasons Resort and Residences Anguilla- Experienced major damage to the resort and the company CEO Barry Sternlicht says “Property was ripped apart and it looks like a nuclear bomb went off. Over $20 million in damage.”

Malliouhana, an Auberge Resort- There was no major structural damage to the resort. The team is now assessing the extent of the clean up required in greater detail and once this is completed they will advise on their proposed reopening date.

Quintessence Boutique Resort- The property sustained a fair amount of damage and the proposed November 1 opening will now be delayed indefinitely.

Zemi Beach House- Zemi Beach had closed to guests in advance of the hurricane. The property held strong during the storm so they will be able to welcome guests back before long, although the timing is still uncertain, as they are still assessing the situation.

Blanchards- Received moderate damage and Blanchards Beach Shack is in good shape, it just needs a little clean-up. The owners expect to be able to open both restaurants as soon as the major resorts are open. daVida Restaurant & Bayside- The main restaurant is still intact, however, the canopy on the second floor of the loft was lost. The Bar at the Bayside is still intact, but the dining area will be rebuilt. Garveys, Pumphouse and Mango’s were destroyed, while Dune Preserve, Elvis’ Beach Bar, Dolce Vita and Ripples also suffered severe damage. Jacala, Geraud’s Patisserie, and Grands Vins de France all survived. Johnno’s, Dads, and Picante are still standing but will require repairs.

The V.C. Bird International Airport opened for all flights and electricity was restored to the Capital St. Johns and most parts of the island.

Curtain Bluff: Property emerged with minimal damage. Clean up has begun and communications will soon be restored.

Jumby Bay Island- No structural damage reported, just landscaping cleanup. The resort is currently closed as part of its annual maintenance so no guests were on the island during Irma. Opens October 9. 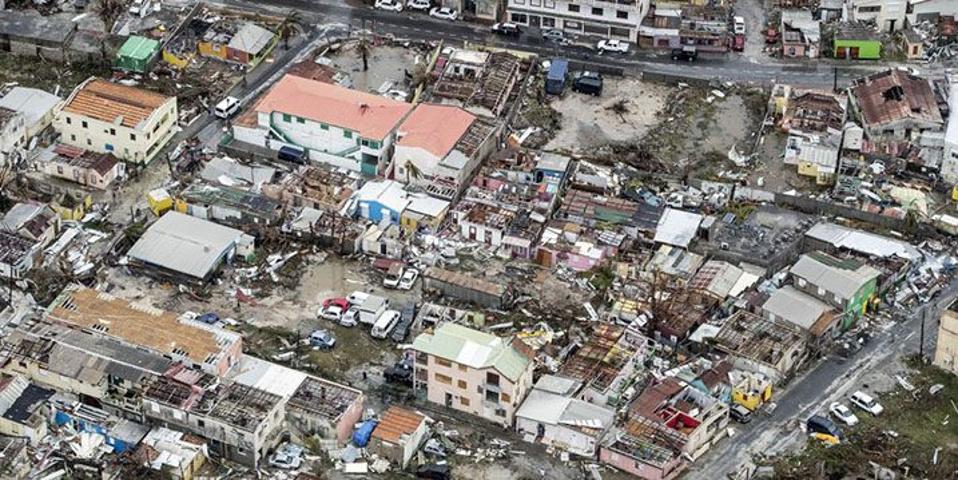 Sad to report: the entire island of around 1,800 people has been evacuated. According to Ambassador Ronald Sanders, “For the first time in 300 years, there’s not a single living person on the island of Barbuda — a civilization that has existed on that island for over 300 years has now been extinguished.” 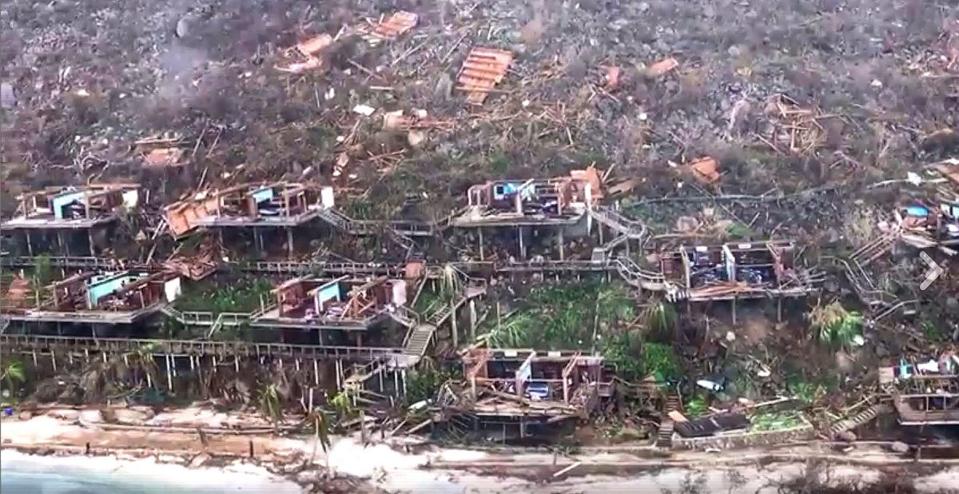 Sugar Mill Hotel– Damage was reported but is expected to open October 14. 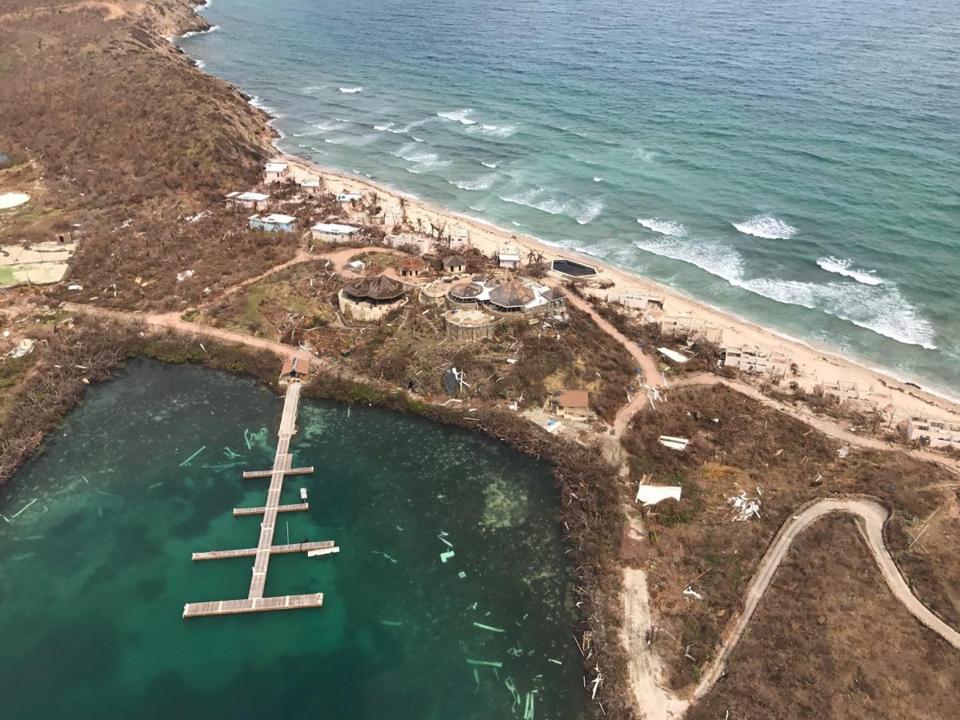 Bitter End Yacht Club – Major damage to the resort and is in the process of estimating the future rebuild.

Oil Nut Bay- Damage was reported but fortunately they have a bunker and staff is safe.

Rosewood Little Dix Bay: Resort was closed for renovation and they are in the process of cleanup 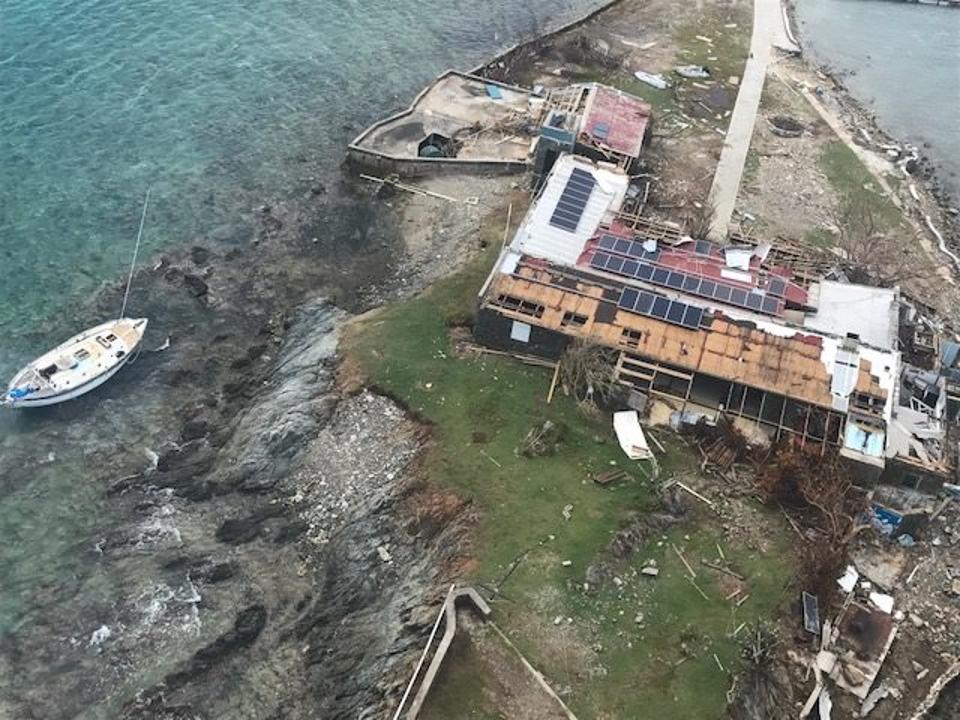 One of my favorite yachting locations in the BVI suffered major damage including the destruction of popular bars like; Ivan’s Stress Free Bar, Soggy Dollar Bar, One Love, Gertrudes Beach Bar and most buildings along White Bay. Foxy’s Tamarind Bar is still standing with roof intact but major damage. Foxy’s Taboo appears to be destroyed. 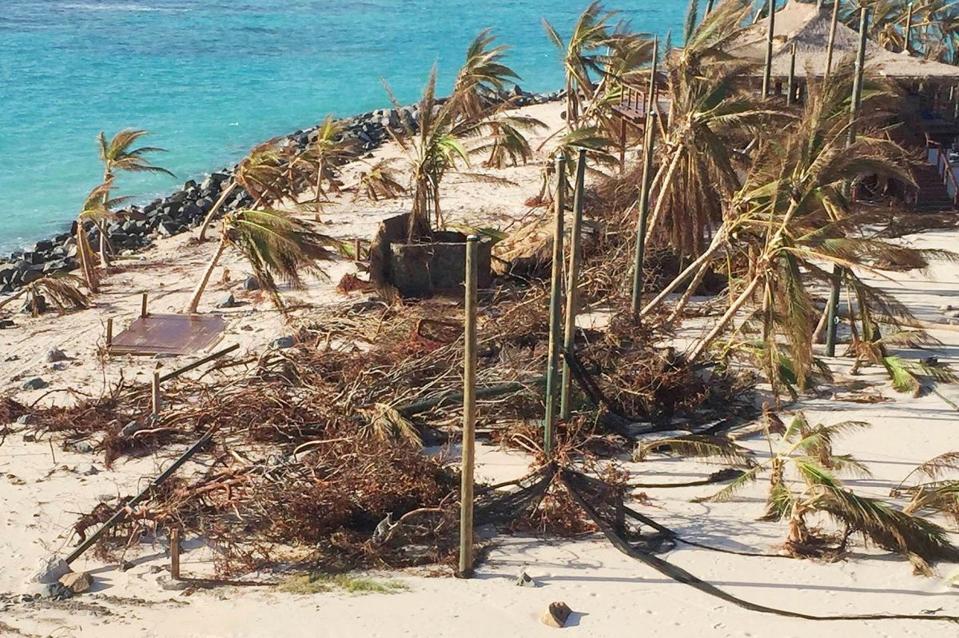 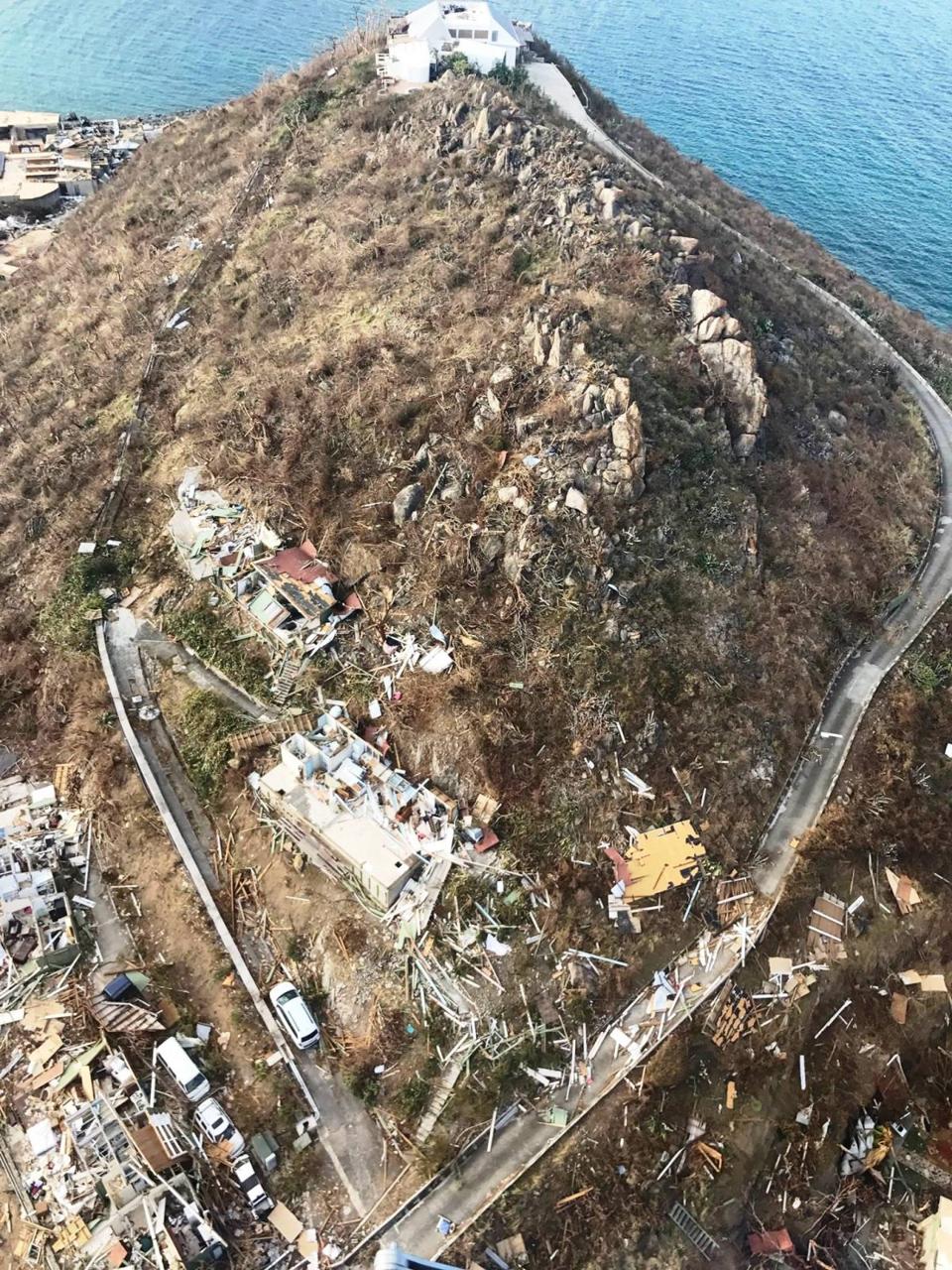 The Eden Rock Hotel- Received heavy structural damage and flooding and are in the process of cleanup and rebuilding. 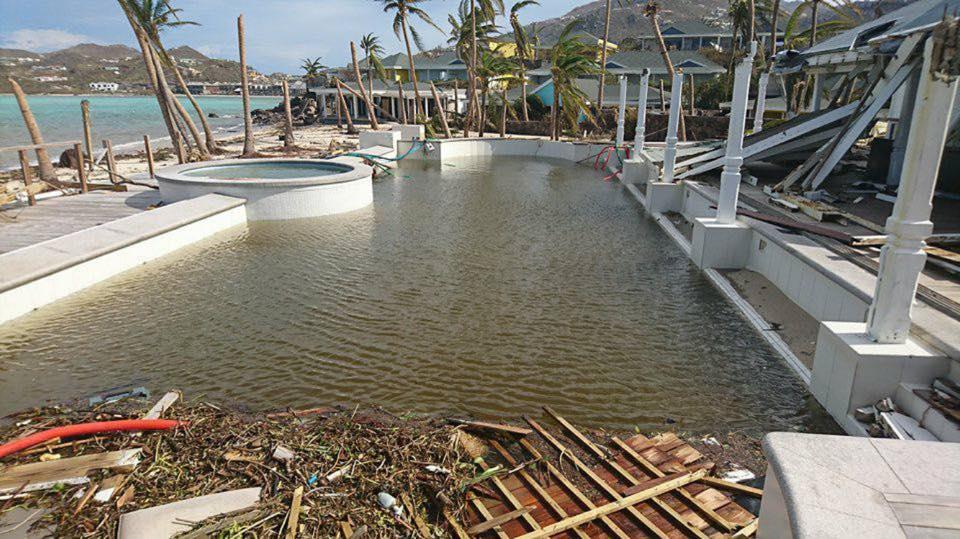 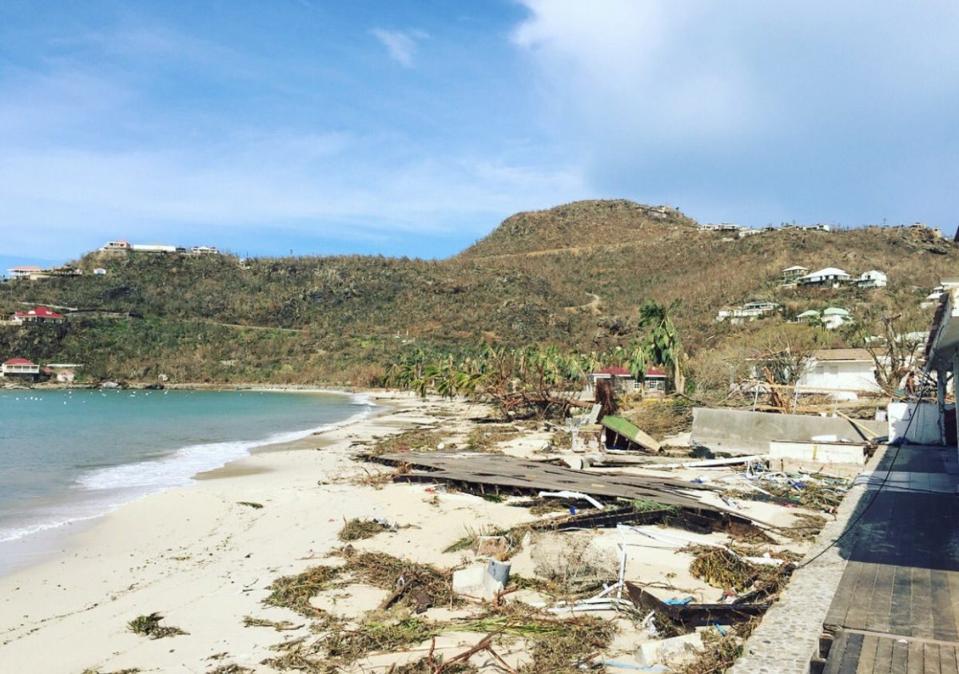 Nikki Beach– Heavily damaged and will need to be rebuilt. Will not open for the 2017 season

Tom Beach Hotel– Reports I am receiving are that it is totally devastated and will need to be rebuilt. 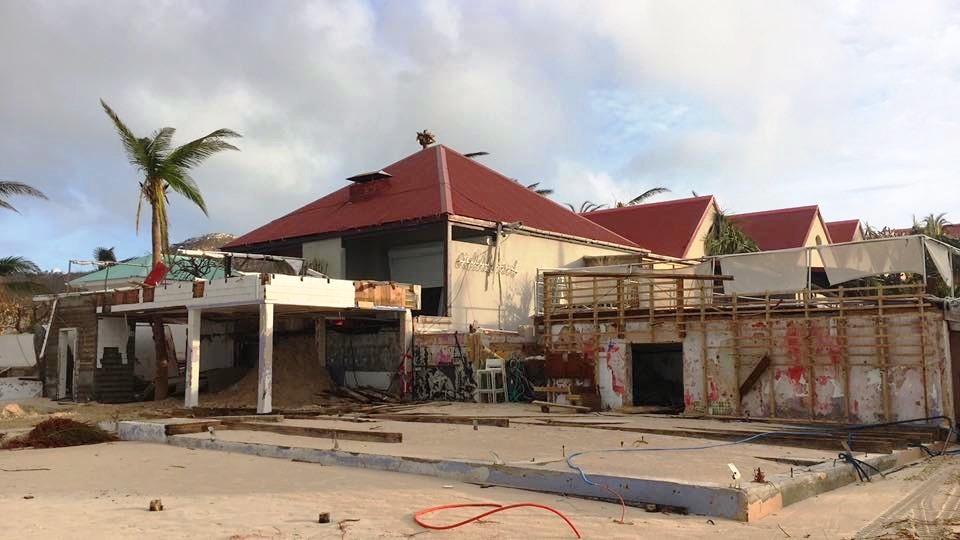 Le Ti– Reports of damage and no opening date yet

Sonesta:  Resort damage is severe. All further reservations from now through the end of 2017 have been canceled.

Amanyara– Hotel had already closed for maintenance until November ahead of the storm. Experienced minor damage and is structurally intact. Will advise as to new opening date.

COMO Parrot Cay- Experienced minor damages, mostly exterior (landscaping). The resort was already closed, until November, for renovations so no guests were on the property during Irma. Property in the process of clean up.

Gansevoort Turks + Caicos- experienced minor damage mostly to exterior vegetation and beachfront. All of the main structures are intact. The hotel tells me they will be opening early October.

Grace Bay Club– fared well in the storm and initial assessments show them to be structurally intact.

Palms Turks & Caicos– The resort sustained no major structural damages during the storm, only extensive landscaping and some water damage. Palms and The Shore Club will close to allow time to complete the necessary repairs and cleanup. Both resorts will reopen on September 30th and reservations are open for booking. 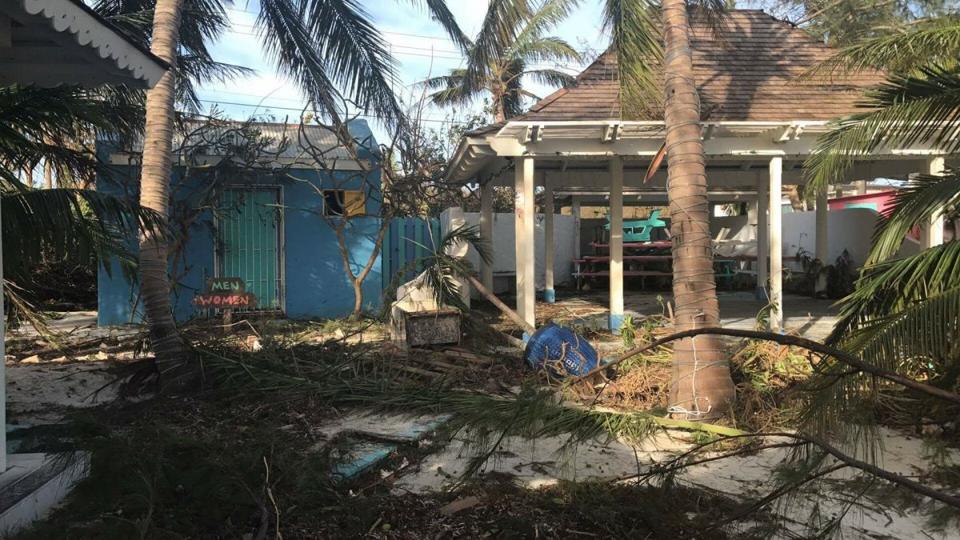 Da Conch Shack – Suffered vegetation damage and flooding but the structure is in tact. Owner John Macdonald tells me: “Blue Hills and da Conch Shack were hard hit by Irma but da Conch Shack remained standing. Had the forecast storm surge materialized we wouldn’t have been so fortunate as we are about 6′ above sea level. We will be undertaking repairs as soon as power is restored and will reopen for the winter season. We will need to replant most of our trees so we might be even a little sunnier than usual but we look forward to once again being the happy friendly place we’ve always been!” 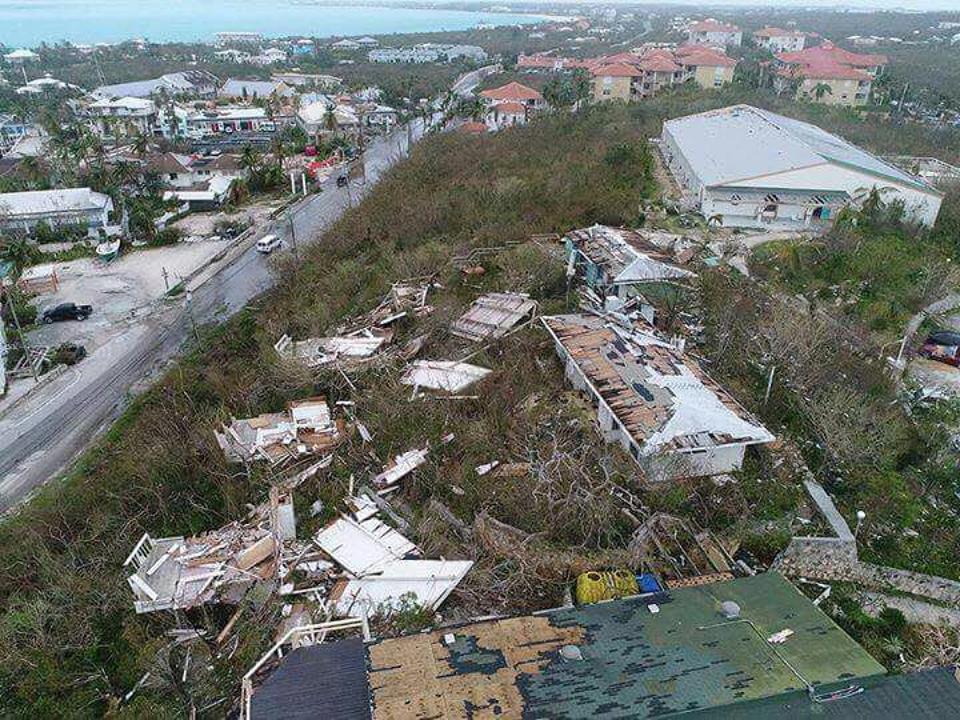 Magnolia Restaurant suffered exterior roof damage and will have a delayed opening while they make repairs and Coco Bistro received minimal damage and will open October 4th. 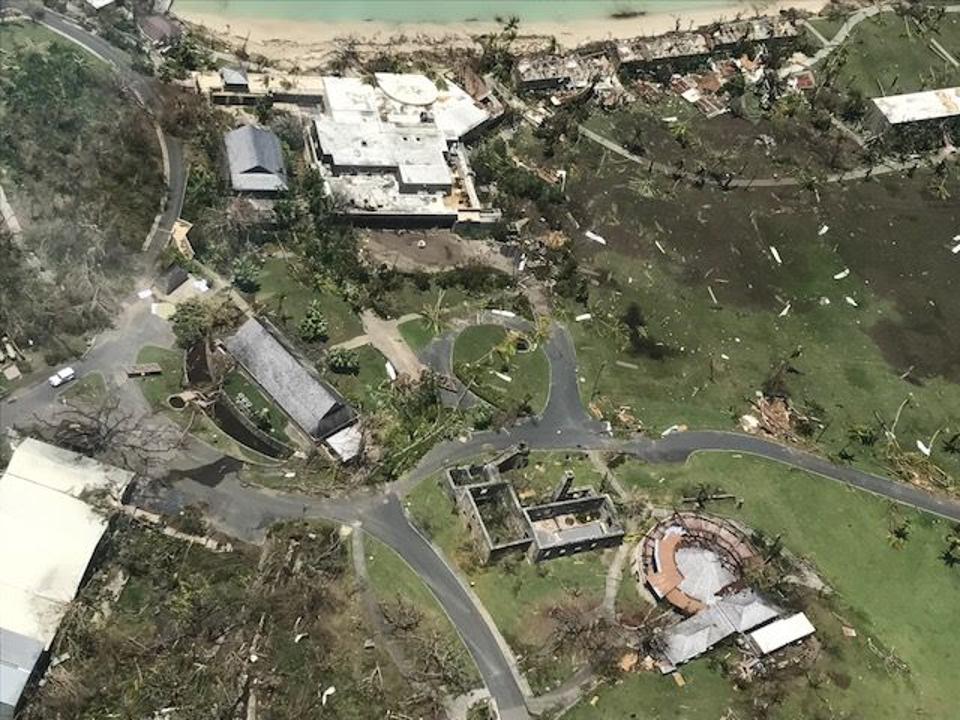 The Ritz-Carlton– sustained damage and is closed until further notice.

Windward Passage: Will close for six months for repairs

Wyndham Resort Margaritaville– From aerial reports, there appears to be minimal damage. Opening date to be determined 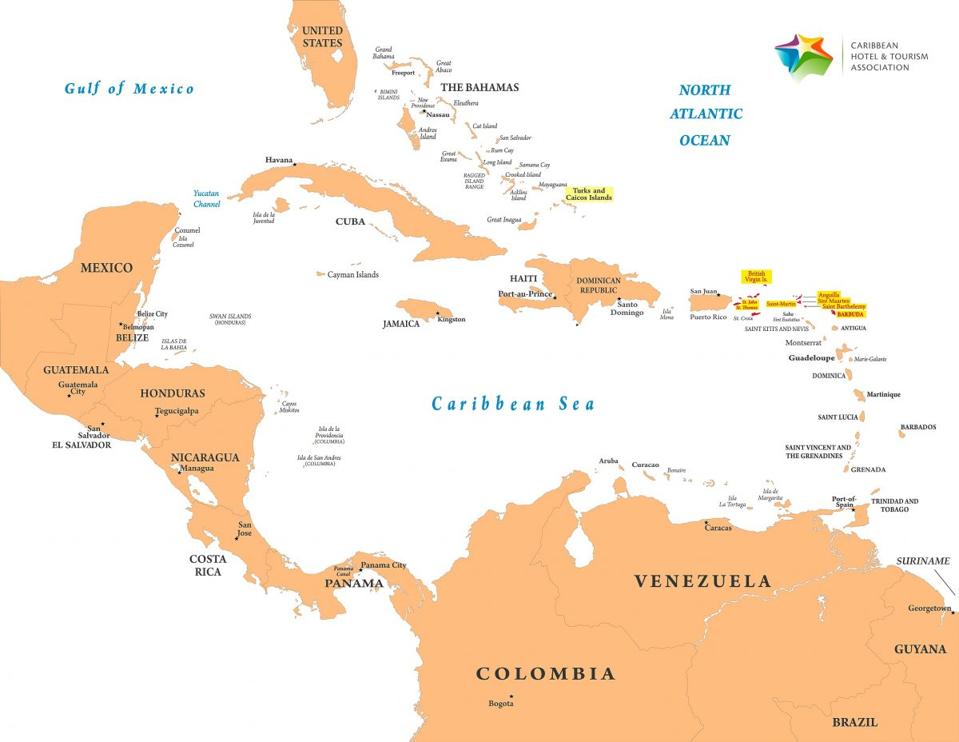