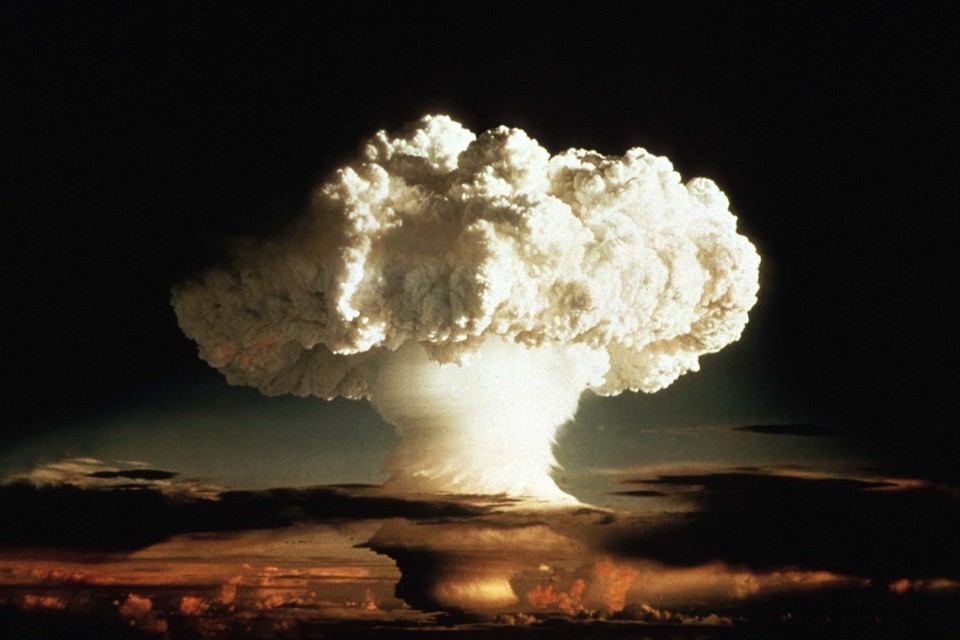 The latest fiery exchange between the United States and North Korea has produced a new kind of threat. On Tuesday, during his speech at the United Nations, President Trump said his government would “totally destroy North Korea” if necessary to defend the United States or its allies. On Friday, Kim Jong Un responded, saying North Korea “will consider with seriousness exercising of a corresponding, highest level of hard-line countermeasure in history.”The North Korean leader didn’t elaborate on the nature of this countermeasure, but his foreign minister provided a hint: North Korea might test a hydrogen bomb in the Pacific Ocean.

“It could be the most powerful detonation of an H-bomb in the Pacific,” Foreign Minister Ri Yong-ho told reporters at the United Nations General Assembly in New York. “We have no idea about what actions could be taken as it will be ordered by leader Kim Jong Un.”

North Korea has so far conducted nuclear tests in underground chambers and ballistic-missile tests in the sky. Conducting a hydrogen-bomb test in the ocean could mean putting a nuclear warhead on top of a ballistic missile and launching them together toward the sea. If North Korea followed through, the test would be the first detonation of a nuclear weapon in the atmosphere in nearly 40 years. It would lead to—aside from untold geopolitical consequences—severe environmental impacts.

Hydrogen bombs are far more powerful than atomic bombs, capable of producing many times more explosive energy. If an H-bomb hits the Pacific, it will detonate with a blinding flash and produce the signature mushroom cloud. The immediate effects likely would depend on the height of the detonation above the water. The initial blast could kill most of the life in the strike zone—scores of fish and other marine life—instantly. When the United States dropped an atomic bomb on Hiroshima in 1945, the entire population located within a radius of 1,600 feet (500 meters) perished.The explosion would send radioactive particles flying through the air and into the water. Wind could carry the dangerous particles over hundreds of miles.

The smoke from the blast site could block out sunlight and hinder life forms at sea that depend on photosynthesis to survive. The exposure to radiation could cause severe health problems for nearby marine life. Radioactivity is known to damage cells in humans, animals, and plants by causing changes in their genes. The changes could lead to crippling mutations in future generations. The eggs and larvae of marine organisms are especially sensitive to radiation, according to experts. Affected animals could pass the exposure up the food chain.

The test could also have damaging and long-lasting effects on humans and other wildlife if the radioactive fallout reaches land. The particles could contaminate air, soil, and water supply. More than 60 years after the United States tested a series of atomic bombs near Bikini Atoll in the Marshall Islands, the island remains “unlivable,” according to a report from The Guardian in 2014. Residents relocated before the tests returned in the 1970s to find high levels of radiation in foods grown near the nuclear test site and were forced to leave again.

More than 2,000 nuclear tests—by various nations, in underground chambers, above ground, and underwater—were carried out between 1945 and 1996, according to the Comprehensive Nuclear-Test-Ban Treaty Organization, which was created when the 1996 treaty banning all nuclear tests went into effect. The United States tested a nuclear-tipped missile, like the one North Korea’s foreign minister described, in the Pacific Ocean in 1962. The last aboveground test conducted by any nuclear power was in China in 1980.This year alone, North Korea has conducted 19 ballistic-missile tests and one nuclear test, according to a database from the Nuclear-Threat Initiative. Earlier this month, North Korea said it conducted a successful underground test of a hydrogen bomb. The event created an artificial earthquake near the test site that was registered by seismic-activity stations around the world. The U.S. Geological Survey said the quake measured magnitude 6.3. A week later, the United Nations passed a U.S.-drafted resolution that would impose new sanctions on North Korea over its nuclear provocations.

Pyongyang’s mention of a potential hydrogen-bomb test in the Pacific will likely increase political tensions and contribute to the ever-growing debate about the true capabilities of its nuclear-weapons program. An H-bomb in the ocean certainly would put any speculation to rest.