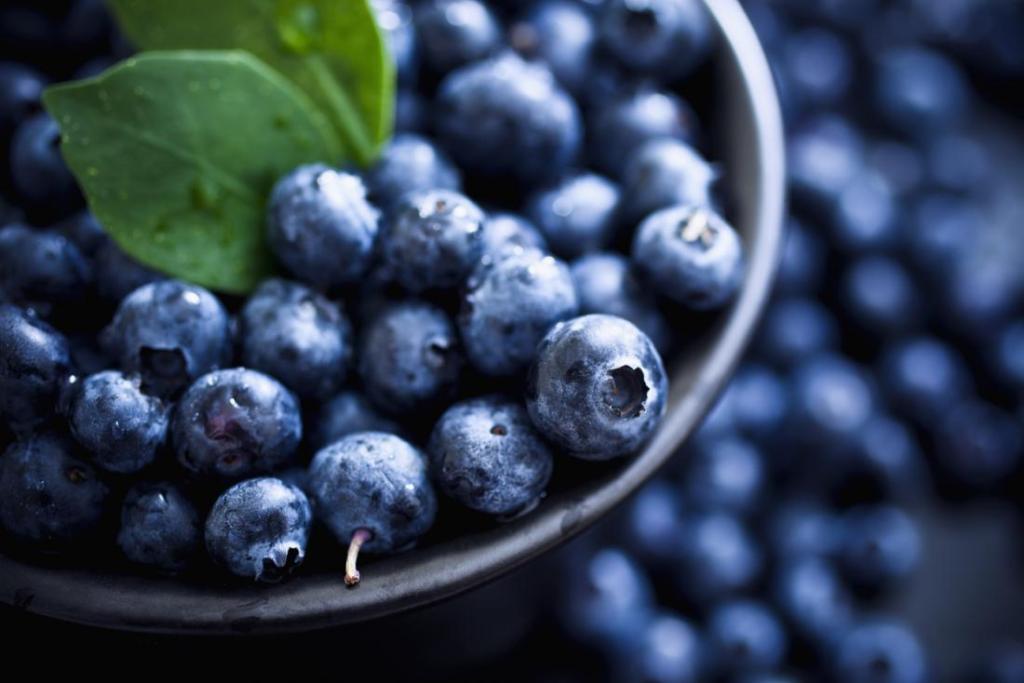 There is a lot of interesting evidence in support of eating a lot of blueberries. From things like improving memory to reducing depression to preventing diabetes. There are actually nutrition scientists who have devoted their careers to studying blueberries.

The research includes findings like: Rats who ate blueberries for two months showed improvements in working memory and did better than their peers at remembering how to navigate a water maze. They became better at balancing on a narrow rod and walking on a rotating rod. And lest these findings be dismissed as a coincidence, researchers even cut open the heads of the rats and saw blueberry pigments in their brains. The blue anthocyanins—among the plant chemicals widely attributed with health benefits due to antioxidant properties—were scattered throughout the cerebellum, cortex, hippocampus, and striatum of berry-fed rats.

Not everyone is a rat, so in addition to all this rodent research, there are many human studies. Blueberries have been reported to lower blood pressure after eight weeks of daily ingestion. Kids have been found to do better on cognitive tests after eating blueberries. In small trials, people who drank blueberry juice reported reduced depressive symptoms and were found to have improved blood-sugar levels and improvements in recalling words. Older adults who ate two daily cups of blueberries reportedly saw improvements in mobility.

Is this all real? How did all this research come to be? Aren’t there serious diseases that are chronically underfunded in terms of research? Why are we so heavily invested in blueberries?

On a bleak December day in New Hampshire in 2015, Diane McKay took the stage to explain some of this. She’s a scientist in the Antioxidants Research Laboratory at the Tufts University USDA Human-Nutrition Research Center on Aging—which is, it turns out, the origin and epicenter of much of the blueberry work. That day she was addressing industry leaders at the New England Vegetable and Fruit Conference. Her talk was called “Superfruit! Understanding the Health Benefits of Blueberries.”

“The term ‘superfruit’ means different things to different people,” she began. “In marketing, it’s used to advertise a product that has a high level of antioxidant activity. In scientific research, the term is virtually meaningless.”

She explained that claims to superfruit status do often involve antioxidants, the compounds that are believed to minimize the effects of oxidative stress on the body. That is, they negate the negative byproducts of metabolism. The berries aren’t just okay, they’re heroic. They fight evil.

But the measurements are easily manipulated. Various antioxidants can be measured in various ways, and invariably some test will land a given fruit near the top of a rank list. This has led to something like the epidemic of participation trophies among child athletics: Everyone’s a superfruit! McKay advised that the term superfruit “should be used with caution, as it may send the wrong message to consumers, implying they should eat less of all other fruits.”

But if any fruit is deserving of superfruit status, she concluded, it actually may be the blueberry—at least according to the amount of research supporting their intake. Is it really that blueberries are especially super, or that there’s just a lot of research on them?

Meet McKay’s colleague, Barbara Shukitt-Hale. Twenty years ago, Shukitt-Hale was drawn into the blueberry game by chance. An experimental psychologist by training, her Boston lab happened to be next door to that of James Joseph, the Tufts scientist credited with popularizing the idea that variously colored fruits have various health benefits.

“They had a machine where they assayed different foods and looked at their abilities to be antioxidants—their ability to quench oxidative stress,” she explained. “They looked at a bunch of fruits and vegetables, and by and large the ones with the darker colors were better antioxidants because the colors are mostly anthocyanins, which are a polyphenol, an antioxidant.”

This was in 1996. Joseph used a new test known as ORAC, or oxygen-radical absorbance capacity, to identify the top fruit in terms of antioxidants. It was, you guessed it, blueberries. The fruit scored higher on the test than pomegranate or acai. (The top vegetable was spinach.)

Since then, Shukitt-Hale has been studying the effects of blueberries on the nervous system. “We found they’re doing a lot besides anti-oxidation,” she said. “They’re also anti-inflammatory. They also have direct effects on the brain, including plasticity and neuronal communication and neurogenesis; they’re involved in the formation of new neurons. They have far-reaching effects.”

This was becoming clear. Her work builds on her late lab neighbor Joseph’s, who first reported that blueberries can improve memory in aging animals: “Does [our research] guarantee that blueberries will have the same effect in humans?” he wrote in 2003’s The Color Code: A Revolutionary Eating Plan For Optimum Health. “Of course not. But I’m not waiting for the evidence to come in. I’m eating blueberries now. They taste good. And compared to some widely touted ‘antiaging remedies’ like growth-hormone injections, they are considerably safer.”
This could explain why antioxidant supplements haven’t been found to live up to the benefits of eating a lot of high-antioxidant foods. To that end, Shukitt-Hale recounts a study where her team treated cells with different compounds found in walnuts, another high-antioxidant food. These components had metabolic effects, but at some point the doses became toxic to the cells. When the researchers put actual walnut oil on the cells, though, things were different. Even at levels at which the individual components were toxic, the walnut oil wasn’t.
She takes this sort of finding to mean there’s “something about the whole food that’s special.”

But what is special about blueberries?

Shukitt-Hale was surprisingly unconvinced that much is. “I think they’re one of the healthiest fruits,” she said. “But eating a wide range of fruits and vegetables, that’s your best bet.”

So why do some people believe that blueberries are healthy? What about all these studies?

“It may be just because blueberries are one of the more well-studied fruits,” she said. “I don’t know if you studied, say, peaches, if it would be the same.”

The fact is that peaches haven’t been studied as intensely as blueberries. Nor have bananas or apples or mangoes. All of that despite the fact that blueberries are among the most recently domesticated crops. Cultivation only really became possible after USDA botanist Frederick Coville’s 1911 discovery that the bushes took to acidic soil, and even still, for decades after, the berries struggled to transcend their something-you-find-in-a-muffin status.

What probably tipped blueberries into the realm of ubiquitous, self-substantiating fruit, Shukitt-Hale told me, was the popular belief in health benefits. And the reason they came together lies in one man: a gray-haired marketing guru named John Sauve.

“He saw the antioxidant studies and wondered if he could use it as a marketing tool,” said Shukitt-Hale. “So he got researchers together to talk about different things they were looking at, and we’ve been meeting now for 20 years. It was his vision.”

Earlier this year, Shukitt-Hale and other researchers from Tufts and the University of New Mexico reported in the European Journal of Nutrition that, indeed, “Dietary blueberry improves cognition among older adults.” Again it was a small study. And the effects were only seen when people were fatigued.

Still, she has come to see blueberries as a sort of medicine. She talks about “dietary blueberry” and people being “on blueberry.” Much like a drug trial, the cognitive-function study was a randomized, double-blinded, placebo-controlled study.

But this isn’t optimal, and it raises an important distinction. At some point between blueberry and multivitamin, apparently, people start losing benefits, which suggests that these reported health effects aren’t really all about antioxidants.

“I’m a proponent of eating whole foods,” Shukitt-Hale said. “There’s something about the food matrix in the whole blueberry that I can’t really explain, but it seems like all of it is important. Some compounds in foods that seemed extraneous actually help carry other compounds other places, and once you start isolating them, the sum of the parts is just less than the whole.”

It turns out that Sauve, more than any of the researchers, is responsible for the popular belief in the health benefits of blueberries. From 1993 to 2004, he worked as executive director of the Wild-Blueberry Association of North America. He is now with a marketing firm, the Food and Wellness Group, where his professional bio explains that he “led the breakthrough health-defining arenas of colorful phytochemicals and antioxidants … and first introduced to the marketplace leading to industry-changing health-driven awareness and demand for blueberries.”

Sauve is not a scientist, but he has had a long career in food marketing. When he heard about the 1996 antioxidant study, he immediately went to Boston and talked to Joseph and Shukitt-Hale.

“For the most part I didn’t understand anything they were talking about,” he told me. Antioxidants was not a household phrase at the time, and the idea that they were integral components of healthy foods was not yet mainstream. But Sauve saw an opening. “I understood that they had found that blueberries produce the highest numbers on the chart. As a marketer, if your product happens to come out first in something, you might want to look into it.”

“It was really at that point when I said we can probably do something with this,” he said.

In the late 1990s, he and the blueberry industry began funding research—through Tufts and elsewhere—that would highlight the health effects of blueberries.

“We took a shot and we invested in it and ended up creating a story with the positioning of blueberries and antioxidants,” he said. In this way he ended up spending very little on advertising, but by 1999 he had gotten global coverage of the studies on blueberries and antioxidants. “We hit this story right. We built it right, we communicated it right, and we got remarkable PR coverage out of it. We ended up with our doctors talking to Oprah and Dr. Oz.”

“The product didn’t change at all. People just started adding the perception of health.”

The first big breakthrough was in Japan, where the wild-blueberry industry had been selling around 2 million pounds per year in 1996. By 1999, they sold 30 million pounds, he said. “And it was the health story that changed the perception of the product. The product didn’t change at all. People just started adding the perception of health, and this new thing called antioxidants.”

It required a little more work in the United States, where focus groups told Sauve that people didn’t know what antioxidants were. He remembers one person saying in 1997, “How can anything that’s against oxygen be good for you?”

He shifted the campaign to include not just telling the public that blueberries contained a lot of antioxidants, but that antioxidants were healthy. The centrality of this latter notion to much modern health dogma traces to Sauve’s blueberry information campaign.

“We were the first into the story of the colorful assets of phytochemicals,” he said, referring to the fact that other fruits and vegetables have adopted the same strategy. “It didn’t exist, and so we created it. Of course, we were lucky because we had the word blue right there in our name.”

The investment in research paid off. He sees it as the primary reason that over the last 20 years, the North American blueberry supply has increased from 300 million pounds annually to around 1.5 billion.

“There are so many wonderful players involved in this story,” he said. “All the researchers got published. Researchers love to be published, and we helped them do that. We promoted them, and they continued to do all their great work.”