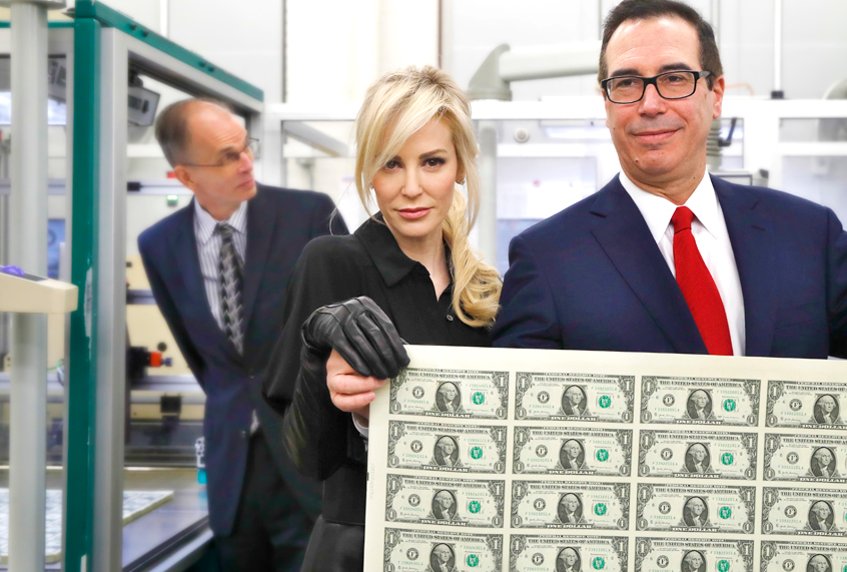 Treasury Secretary Steve Mnuchin told “Fox News Sunday” he is OK with the comparisons to a James Bond villain following a photo shoot with his wife and sheets of newly printed money. The internet immediately likened the photos, which went viral, to scenes out of a James Bond movie, as the newly wedded couple clearly enjoyed being surrounded by dollar bills.

“Fox News Sunday” host Chris Wallace asked Mnuchin about the photos and the comparisons he and his wife were getting to James Bond villains.

“I heard that,” Mnuchind admitted. “I never thought I’d be quoted is looking like villains from the James Bond. I guess I should take that as a compliment that I look like a villain in a great, successful James Bond movie.”

The former Hollywood producer and his wife were touring the Bureau of Engraving and Printing to see the first dollar bills with his signature on it. Mnuchin said it was a “great privilege” to have his signature printed on the new dollar bills.

“Let me just say, I was very excited of having my signature on the money,” Mnuchin said. “It’s obviously a great privilege and a great honor and something I’m very proud of being the secretary and look forward to helping the American people.”

President Trump’s Treasury secretary said that he did not realize that the photos would go public, even though they were taken by an Associated Press photographer.

“Well, again, I didn’t realize that the pictures were public and going on the Internet and viral,” he said. “But people have the right to do that. People can express what they want. That’s the great thing about social media today. People can say and communicate what they want.”