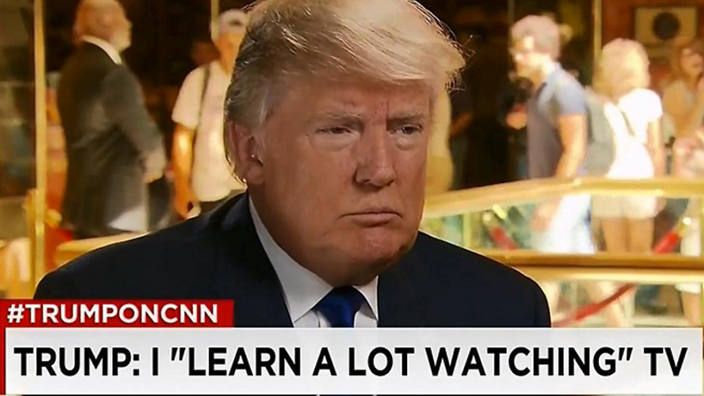 Attorney General Jeff Sessions is considering whether to investigate President Donald Trump’s political enemies, as the president has repeatedly and publicly demanded, the former senator from Alabama told lawmakers this morning at a congressional hearing.

According to a letter the Justice Department sent the committee yesterday, the issues the prosecutors are examining include “the sale of Uranium One” and “alleged unlawful dealings related to the Clinton Foundation.”

“I don’t want to be Chicken Little, but, you know what, this is what happens in authoritarian countries like Turkey and Russia, that when a party takes power, they start criminally investigating their opponents,” CNN legal analyst Jeffrey Toobin warned this morning. Referencing the letter’s mention of Uranium One, he added, “This is a question about whether Fox News runs the Justice Department.”

Other analysts have suggested that Sessions isn’t trying to take a cudgel to the rule of law in this country, but merely trying to assuage Republican lawmakers who are eager to investigate Clinton. Under this line of thinking, Sessions is just telling members of Congress that he is listening to their concerns, but the result will be a recommendation from prosecutors not to move forward with an investigation. Sessions seemed to lean in that direction later in his testimony, suggesting there may not be a “factual basis” to appoint a special counsel.

That’s best case scenario — the attorney general isn’t seriously contemplating a big step toward a banana republic, just a small one to get members of his party who are drunk on Fox’s coverage to back off. That, in and of itself, “is hardly normal,” as CNN legal analyst Steve Vladeck wrote. But it’s better than a country teetering down a path well-trod by autocrats throughout history.

Either way, the president has spent months using public statements and his Twitter feed to urge prosecutors to target former Democratic presidential nominee Hillary Clinton and her allies. The attorney general is publicly taking action that could lead to such prosecutions. And, as Toobin pointed out, Fox has played a crucial role in making this day possible.

Sean Hannity, the Fox host with the largest audience in cable news, said as much last night on his program. “Finally,” Hannity exulted in describing the contents of the DOJ letter. “Sessions is. . . leaving the door open for the appointment of a special counsel, what we have been calling for.”

Breitbart chief executive Steve Bannon and one of his employees, the discredited author Peter Schweizer, first launched the Uranium One conspiracy theory in 2015. Its thesis is that Clinton played a “central role” in the federal government’s approval of the Russian nuclear energy agency’s purchase of the company in 2010, when she was secretary of state, because her husband and the Clinton Foundation were bribed with payments from people linked to the deal. This is nonsense for many reasons, notably that there’s actually no evidence Clinton played any role at all in the approval process.

But Uranium One has become the talisman Hannity has used to ward off special counsel Robert Mueller’s investigation into Trump’s associates and their ties to Russia. In Hannity’s telling, repeated over and over again this summer, the Uranium One sale demonstrates that Clinton is the one guilty of “real collusion” with Russia as well as a variety of federal crimes that demand an investigation. He’s also frequently used the case to demand Mueller’s resignation.

Hannity is leading the way, but he’s not alone at Fox. A new and quickly debunked report about Uranium One published in “The Hill” last month triggered nearly 12 hours of coverage on the network in three weeks, driving discussions on nearly every Fox program, according to a “Media Matters” study.

One of our more curious findings in that study was that “Justice with Jeanine Pirro,” a weekly hourlong show that aired only three times in the period reviewed, carried the fifth-most coverage on the network, a whopping 52 minutes of Uranium One discussion.

“Starting Monday, this has to happen,” Pirro said on the October 28 edition of her Saturday night show. “Special counsel and former FBI Director Robert Mueller must be fired immediately. … The special counsel’s office must be shut down. . . . Jeff Sessions must appoint someone to investigate the uranium deal. … And if he doesn’t do it, it’s time for Sessions to go.”

Four days later, “The New York Times” reported, she was invited to the White House and made the same argument directly to the president:

One commentator in particular, the Fox News host Jeanine Pirro — who is a friend of Mr. Trump’s and whose show he rarely misses — has aggressively denounced Mr. Sessions as weak for not investigating the uranium deal. In addition to making scathing critiques on her show, Ms. Pirro — who had interviewed to be the deputy attorney general, according to three transition officials — recently met with the president to excoriate the attorney general.

In an Oval Office meeting on Nov. 1, Ms. Pirro said that a special counsel needed to be appointed, according to two people briefed on the discussion.

Pirro isn’t the only one at Fox pushing the Uranium One story who has the ear of the president. Trump reportedly frequently calls Hannity after his show ends, and there’s evidence the Fox host has driven federal policy with his advice before. And the president regularly tweets along with the Fox morning show Fox & Friends, which also champions the conspiracy theory.

Fox’s coverage already seems to have encouraged congressional Republicans to launch a Uranium One probe. And now the attorney general is taking his own steps, uncertain as their goal may be.

At best, Fox is running Congress. At worse, as Toobin suggests, the network’s in charge of the Justice Department.