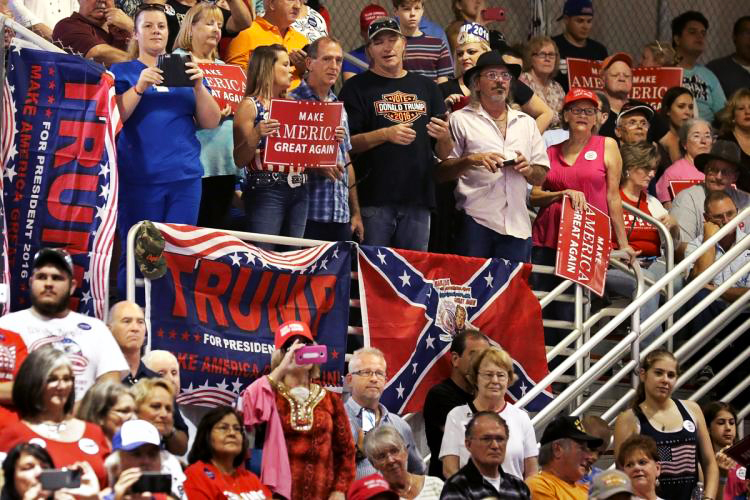 One of the first mentions of Trump in The New York Times was in 1973, as a result of a federal discrimination lawsuit against his buildings over his company’s refusal to rent to black tenants.

In 1989, he took out a full-page newspaper ad suggesting that the Central Park Five, black and Latino youths accused of the assault and rape of a white jogger, should be put to death. They were later exonerated.

His rise to prominence in Republican politics was first fueled by his embrace of the conspiracy theory that the first black president of the United States was not an American citizen. “I have people that have been studying [Obama’s birth certificate] and they cannot believe what they’re finding,” he said in 2011 as he championed the “Birther” movement. “If he wasn’t born in this country, which is a real possibility … then he has pulled one of the great cons in the history of politics.”

Trump began his candidacy with a speech announcing that undocumented immigrants from Mexico were “bringing drugs. They’re bringing crime. They’re rapists.”  To keep them out, he proposed building a wall and humiliating Mexico for its citizens’ transgressions by forcing their government to pay for it.

He vowed to ban Muslims from entering the United States.

Amid heightened attention to fatal police shootings of unarmed black people and a subsequent cry for accountability, Trump decried a “war on police” while telling black Americans they lived in “war zones,” in communities that were in “the worst shape they’ve ever been in”—a remarkable claim to make in a country that once subjected black people to slavery.

He promised to institute a national “stop and frisk” policy, a police tactic that turns black and Latino Americans into criminal suspects in their own neighborhoods, and which had recently been struck down in his native New York as unconstitutional.

Trump expanded on this vision in his 2016 Republican National Convention speech, which gestured toward the suffering of nonwhites and painted a dark portrait of an America under assault by people of color through crime, immigration, and competition for jobs. Trump promised, “The crime and violence that today afflicts our nation will soon come to an end.”

He warned that “180,000 illegal immigrants with criminal records, ordered deported from our country, are tonight roaming free to threaten peaceful citizens,” and said that Clinton was “calling for a radical 550 percent increase in Syrian refugees on top of existing massive refugee flows coming into our country under President Obama.”

A bleak vision, but one that any regular Fox News viewer would recognize.

The white-supremacist journal American Renaissance applauded Trump’s message. “Each political party proposes an implicit racial vision,” wrote one contributor. “A Trump Administration is a return to the America that won the West, landed on the moon, and built an economy and military that stunned the world. Non-whites can participate in this, but only if they accept the traditional (which is to say, white) norms of American culture.”

Yet most Trump voters would not consider themselves racist… so how do they justify voting for a racist candidate?

THIRTY YEARS AGO nearly half of Louisiana voted for a Klansman, and the media struggled to explain why.

It was 1990 and David Duke, the former grand wizard of the Ku Klux Klan, astonished political observers when he came within striking distance of defeating incumbent Democratic U.S. Senator J. Bennett Johnston, earning 43 percent of the vote. If Johnston’s Republican rival hadn’t dropped out of the race and endorsed him at the last minute, the outcome might have been different.

Was it economic anxiety? The Washington Post reported that the state had “a large working class that has suffered through a long recession.” Was it a blow against the state’s hated political establishment? An editorial from United Press International explained, “Louisianans showed the nation by voting for Duke that they were mad as hell and not going to take it any more.” Was it anti-Washington rage? A Loyola University pollster argued, “There were the voters who liked Duke, those who hated J. Bennett Johnston, and those who just wanted to send a message to Washington.”

“There’s definitely a message bigger than Louisiana here,” Susan Howell, then the director of the Survey Research Center at the University of New Orleans, told the Los Angeles Times. “There is a tremendous amount of anger and frustration among working-class whites, particularly where there is an economic downturn. These people feel left out; they feel government is not responsive to them.”

Duke’s strong showing, however, wasn’t powered merely by poor or working-class whites. He picked up nearly 60 percent of the white vote.

Duke’s candidacy had initially seemed like a joke. He was a former Klan leader who had showed up to public events in a Nazi uniform and lied about having served in the Vietnam War. But the joke soon soured, as many white Louisiana voters made clear that Duke’s past didn’t bother them.

Many of Duke’s voters steadfastly denied that the former Klan leader was a racist. The St. Petersburg Times reported in 1990 that Duke supporters “are likely to blame the media for making him look like a racist.”

Trump later predicted that if Duke ran for president,  he would siphon most of his votes away from the incumbent, George H. W. Bush—in the process revealing his own understanding of the effectiveness of white-nationalist appeals to the GOP base.

“Whether that be good or bad, David Duke is going to get a lot of votes. Pat Buchanan—who really has many of the same theories, except it’s in a better package—Pat Buchanan is going to take a lot of votes away from George Bush,” Trump said. “So if you have these two guys running, or even one of them running, I think George Bush could be in big trouble.”

Yet in February 2016, Trump was asked about the former Klan leader’s endorsement of his Republican presidential bid.

Less than three weeks before the 2016 presidential election, Donald Trump declared himself “the least racist person you have ever met.”<

Even before he won, the United States was consumed by a debate over the nature of his appeal. Was racism the driving force behind Trump’s candidacy? If so, how could Americans, the vast majority of whom say they oppose racism, back a racist candidate?

Trump’s supporters were in denial about what they were voting for, just as had been the case with those who had backed Duke.

The frequent post-election media expeditions to Trump country to see whether the fever has broken, or whether Trump’s most ardent supporters have changed their minds, reveal that these supporters have not changed their minds, because this is what they always wanted: a president who embodies the rage they feel toward those they hate and fear, while reassuring them that that rage is nothing to be ashamed of.

The specific dissonance of Trumpism—advocacy for discriminatory, even cruel, policies combined with vehement denials that such policies are racially motivated—provides the emotional core of its appeal. It is the most recent manifestation of a contradiction as old as the United States, a society founded by slaveholders on the principle that all men are created equal.

Barely a year into his presidency, he has made a farce of his populist campaign and those that voted for him thinking it was in their own self interests, by putting bankers in charge of the economy, and industry insiders at the head of the federal agencies established to regulate their businesses.

As the president continues to pursue a program that places the social and political supremacy of white Christians at its core, his supporters have shown few signs of abandoning him.

One hundred thirty-nine years since Reconstruction, and half a century since the tail end of the civil-rights movement, a majority of white voters backed a candidate who explicitly pledged to use the power of the state against people of color and religious minorities. Their support was enough to win the White House, and has solidified a return to a politics of white identity that has been one of the most destructive forces in American history. This all occurred before the eyes of a disbelieving nation, while his supporters plunged into fierce denial that racism isn’t why this had happened. That is the story of the 2016 election.