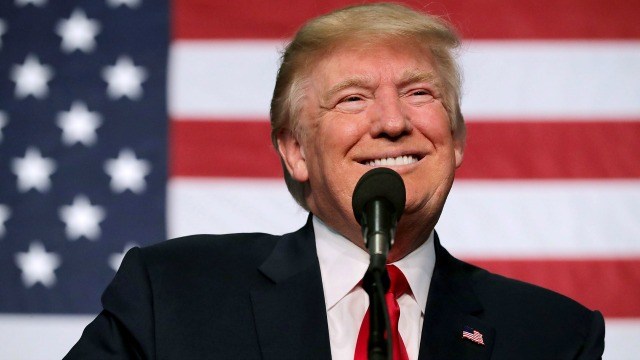 The president of the United States continues to make statements that are in conflict with the facts. These are called lies.

Donald Trump and six members of his inner circle will be big winners of the Republicans’ vast tax overhaul, with the president personally benefiting from a tax cut of up to $15m a year, research shows.

The US president chalked up his first big legislative win on Wednesday with the $1.5tn bill, the most sweeping revamp of the tax code in three decades, slashing taxes for corporations and the wealthy and dealing the heaviest blow yet to Obamacare.

President Trump had previously said that the new tax plan will benefit the middle class at the expense of wealthy Americans like himself.

“They can call me all they want. It’s not going to help,” Trump said of his rich friends. “And it’s not good for me, believe me.”

That is simply not true.

But analysis by a leading Washington thinktank, the Center for American Progress (CAP), finds that changes to business rules will save Trump roughly $11m to $15m per year, while an amendment to the estate tax – the tax on the transfer of an estate of a deceased person – would potentially save his heirs $4.5m.

Under current law, the first $11.2m of a couple’s estate’s value is excluded from taxation, and any amount above this is taxed at a 40% rate. The new bill doubles the exemption to $22.4m.

Along with Trump himself, Wilbur Ross, the commerce secretary; Linda McMahon, administrator of the Small Business Administration; Betsy DeVos, the education secretary; Steven Mnuchin, the treasury secretary; and Rex Tillerson, the secretary of state, will benefit to the tune of $4.5m from changes to the estate tax, according to the CAP.

More than 90% of businesses in the US are “pass-through businesses”, meaning their income passes through to the owners’ individual tax returns, where it is taxed at ordinary income tax rates, instead of being filed on a separate business return like a corporation. The sweeping tax bill cuts the top rate on “qualified” pass-through business income from 39.6% under current law to 29.6%.

Assuming the full benefit of this, the CAP roughly estimates a tax cut of $11m to $15m for Trump (based on an estimate of $150m of passthrough income from reviewing his financial disclosure, and the $109m in real estate/pass-through income on his 2005 tax return); $5m to $12m for Jared Kushner, White House senior adviser and Trump’s son-in-law; and $2.7m for Betsy DeVos, the education secretary.

The bill that passed the Senate had a “guardrail” that prevented businesses with too few employees from claiming the full benefit of the deduction, the CAP noted. But at the last minute, a special exception was added that is especially beneficial to real estate firms.

In addition, the biggest element of the tax bill benefitting the wealthy is the corporate tax cut. Again, members of Trump’s cabinet have substantial corporate stock holdings and will be among the winners. The CAP did not try to estimate this because it is hard to quantify the tax cut for any one corporation.

Jubilant Republicans took a victory lap at the White House on Wednesday to mark what they called a historic day. The House speaker, Paul Ryan, praised Trump for “exquisite presidential leadership”. But in coming months and years, analyses such as the CAP’s could come back to haunt them.

Seth Hanlon, a senior fellow at the thinktank, said: “I think that the American people, whether they receive a tax increase or tax cut from this bill, are outraged that President Trump, his cabinet, and members of Congress stand to receive big payouts from this tax bill. The extent of the self-dealing became especially apparent when a last-minute provision benefitting the real estate industry was inserted at the last minute.”

Hanlon added: “Trump, of course, promised to release his tax returns, like every president since the 1970s, but has brazenly gone back on his word. Congress has the full power to obtain and release Trump’s tax returns, but the Republican majority has buried its head in the sand.

“Still, there is no doubt that Trump is getting major new tax cuts from this bill – at the same time as it preserves special loopholes, like the deductions Trump reportedly takes on his golf courses. These are just one illustration of the venality and corruption behind this bill.”

Despite White House promises that the tax overhaul would focus on the middle class, the nonpartisan Tax Policy Center, a thinktank in Washington, estimates that middle-income households will see an average tax cut of $900 next year under the bill, while the wealthiest 1% will enjoy an average cut of $51,000.

TJ Helmstetter, communications director of Americans For Tax Fairness, said: “This is not tax reform, it’s a money grab by the ultra-wealthy, including the multimillionaires in Congress and Trump’s own cabinet, who will benefit. When all is said and done, over 80% of the tax cuts will wind up in the pockets of the top 1%. Meanwhile, all of this will be paid for by the middle class and families who are struggling to get by.”