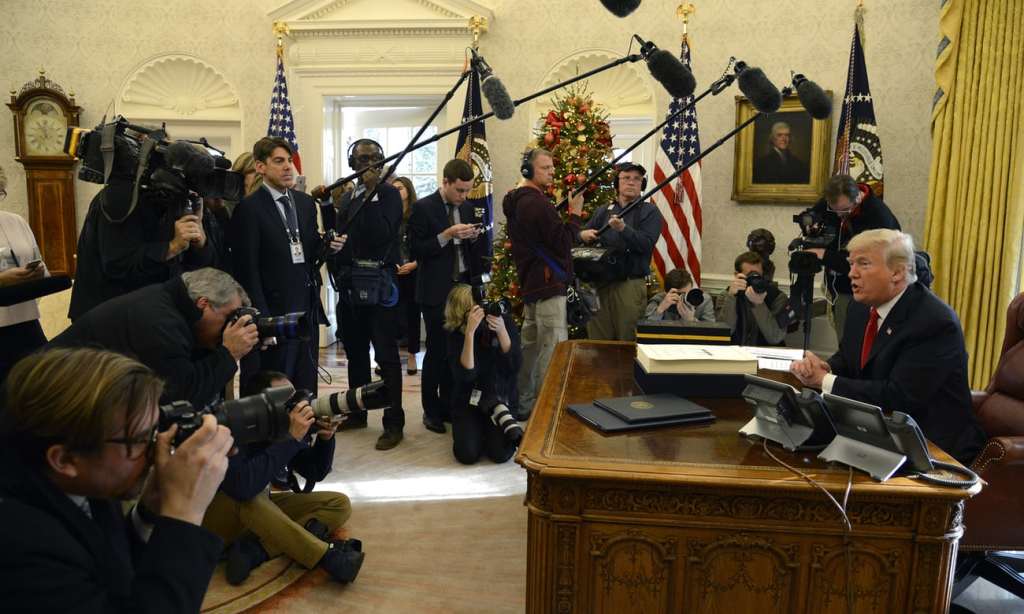 For better or worse – more often than not worse – Donald Trump’s short presidency has, so far, been remarkable.

The president’s unusually thin skin and volatile temper have prompted a series of bizarre questions that many journalists may never have expected to have had to ask. Here are some of the most outlandish.

Do you think that that talking about millions of illegal votes is dangerous to this country without presenting the evidence?

It quickly became clear that Trump could not handle losing the popular vote – by more than 2 million – to Hillary Clinton.

The result? Unsubstantiated claims from the president that there was widespread voter fraud, prompting this question just over a week after Trump took office.

Why did you wait so long to denounce neo-Nazis?

After the white supremacist march in Charlottesville ended with the death of civil rights activist Heather Heyer, Trump’s response was to blame the violence “on many sides”. A press conference at Trump Tower prompted an incredulous line of questioning from journalists.

During the same press conference Trump claimed that there were “very fine people” among the far right marchers in Charlottesville.

I just didn’t understand what you were saying. You were saying the press has treated white nationalists unfairly?

Trump: “It looked like they had some rough, bad people, neo-Nazis, white nationalists, whatever you want to call ‘em. But you had a lot of people in that group that were there to innocently protest and very legally protest.”

There are reports out today – over the last couple days – about him [Rex Tillerson, US secretary of state] calling you a moron privately. Has he talked, reached out to you about that? Do you believe that he said that?

In an interview with Forbes magazine, reporter Randall Lane asked the president about a story initially reported by NBC. (NBC journalist Stephanie Ruhle later clarified that, according to her source, Tillerson had actually called Trump a “fucking moron”.)

Trump’s response: “Well, we may have to, if he did that – which he says he didn’t, by the way, he said he didn’t. And they announced with the state department that he didn’t. I think it’s fake news, but if he did that, I guess we’ll have to compare IQ tests. And I can tell you who is going to win.”

Is Roy Moore, a child molester, better than a Democrat?

Trump had just given his tentative support to Roy Moore, even though Alabama Senate hopeful has been accused of assaulting a 14-year-old girl, and other young women.

The president’s reply to the question: “Well, he denies it.”

Does the president regret at all describing these players who take a knee for the national anthem as SOBs who should be fired?

As more NFL players – inspired by Colin Kaepernick – began to kneel in protest against police brutality, the president responded angrily at a speech in Alabama.

“Wouldn’t you love to see one of these NFL owners, when somebody disrespects our flag, to say, ‘Get that son of a bitch off the field right now. Out! He’s fired. He’s fired!’”

So to be very clear, you say the president is instead emphasizing something that brings Americans together. Then what message does it send for the president to stand behind the presidential seal at a rally in Alabama and call an American citizen who is expressing his first amendment rights a “son of a bitch”?

Again, Sanders defended the president. She said: “Again, I think it’s always appropriate for the president to defend our flag, to defend the national anthem —

Is it appropriate to use that language about an American citizen?

Sanders: “Hold on, I’m not finished. It’s always appropriate for the president of this country to promote our flag, to promote our national anthem, and ask people to respect it.”

Does this administration believe, does this president believe, slavery was wrong?

Ryan added: “Before you answer, Mary Frances Berry, the historian, said in 1860, there was a compromise. The compromise was to have southern states keep slavery. But the Confederacy fired on Fort Sumter.

“That caused the civil war. And because of the civil war, what happened? The north won, and there’s no slavery.”

Sanders: “I think it is disgusting and absurd to suggest that anyone inside of this building would support slavery.”

This was posed to Sarah Sanders, after Trump used a racial slur during an event praising three Native Americans who served during the second world war.

Sanders, yet again, had to scrabble around to defend the president. Calling a Native American person “Pocahontas” is not a racial slur, she said. So that’s that, then.

Why is the president retweeting a far-right, anti-Muslim group that’s been condemned?

Trump got himself in hot water yet again when he retweeted a series of videos posted by the leader of Britain First, a far-right political party. In a press gaggle, principal deputy press secretary Raj Shah, drafted in for Sanders, struggled to explain his boss’s thinking.

“We’re going to be focusing on the issues that are being raised, which is safety and security for the American people,” Shah said.

“The president is going to continue talking about these issues because they’re important for the safety and security of this country.”