Someone should probably tell Donald Trump that smart people usually don’t tweet about being “like, really smart” and “a very stable genius.” But it’s too late for that because the President already used his Twitter fingers to send out those exact sentiments on Saturday morning. His tweets seemed to be in response to the claims that a number of White House staffers questioned his mental stability.

The report comes from a scathing new book titled Fire and Fury: Inside the Trump White House, which was released this week by Michael Wolff, a media columnist who was “a fly on the wall” in the White House during the early days of Trump’s presidency.

Trump’s lawyer, Charles Harder, reportedly demanded the tell-all book, which reveals details about Trump’s relationship with Melania and his poor eating habits, not be published by citing “defamation, libel, and actual malice,” but Wolff went forward with the release anyway; he actually pushed the release date up a few days earlier so the public could read it sooner.

The bold move likely pissed Trump off even further, and it appears the President felt the need to remind us that he is a genius and “like, really smart.” 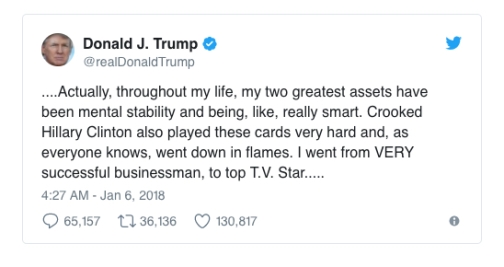 No one seems to deny that the sentiment is Trumpian. Even the machines agree: the site Did Trump Tweet It? puts the machine-learning probability that Trump wrote the tweet at over 99 percent. But those fussy commas around the like suggested to many that Trump must have dictated the tweet—perhaps to his communications director Hope Hicks, who is painted in Wolff’s book as “the ultimate facilitator of unmediated behavior,” on Twitter and elsewhere.

The commas around like are an anomaly in the president’s tweeting history: Of the tens of thousands of tweets in the Trump Twitter archive, this is the first time like has appeared this way, except for in two manual retweets.

But while tweeting-Trump may never have used like in this way before yesterday, speaking-Trump uses it all the time—at least when he’s touting his own intelligence. Back on July 11, 2015, less than a month after Trump declared that he was running for president, he told a rally in Phoenix, Arizona, “I’m, like, a really smart person.” (That inspired MSNBC’s Rachel Maddow to run a segment with “Like, a Really Smart Person!” displayed on the screen behind her.) In December 2015, he told CNN’s Don Lemon, “But I’m, like, a really smart person. You know, I went to Ivy League schools.”

He continued the “like, smart” theme all through 2016. “I’m conservative, folks, but I’m also, like, smart,” he said at an Arizona rally in March excoriating Jeb Bush. “I’m, like, a really smart person, like a lot of you people,” he said in Connecticut in April, before explaining that “it’s very easy to be presidential” if he wants to be. And in December, responding to a question from Chris Wallace on Fox News Sunday about why as president-elect Trump was eschewing the daily intelligence briefing, he said, “you know, I’m, like, a smart person.” That led Seth Meyers to crack on his late-night show that “‘I’m, like, a smart person’ is a sentence that disproves itself. It’s like getting a back tattoo that says ‘I make good decisions.’” Despite the ribbing, Trump doubled down when he spoke at the CIA headquarters on his first official day in office, saying, “Trust me, I’m, like, a smart person.”