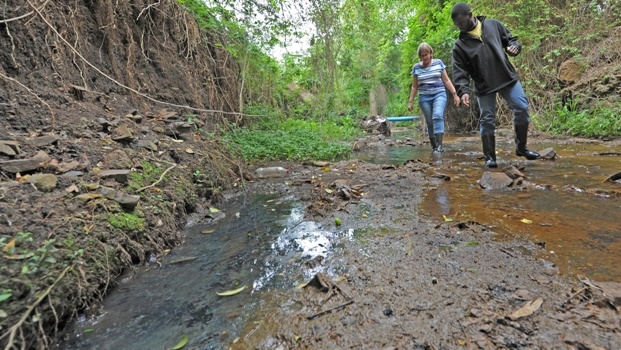 New York City is the beating heart of global finance, a cultural behemoth, and home to more than 8.5 million people who create an enormous amount of crap. Some would same figuratively as well as literally. But for this article, we are talking about the literal crap. And some of this expelled waste has been causing a major stink 900 miles away, in Alabama.

Residents in and near Birmingham have been in uproar over sewage that is transported by train and truck from New York and New Jersey to be dumped in the southern state.

The treated sewage – euphemistically known in the industry as “biosolids” – has plagued residents with a terrible stench, flies and concerns that spilled sludge has leaked into waterways.

“On a hot day, the odor and flies are horrific,” said Charles Nix, mayor of West Jefferson, a town near the landfill that accepts the waste. “It’s better in winter time but if the wind blows in the wrong direction you get the smell. It’s like dead, rotting animals.”

“If you get close to the trucks the liquid would blow off on to your windshield and fill your car with a stink. It spilled out on to the road. Some people were saying they just wanted to move away, they were so miserable.”

Last year, Big Sky Environmental, a landfill west of Birmingham, got permission from Alabama authorities to accept sewage waste, despite objections from residents. Initially, the waste was taken down from New York and New Jersey to a rail spur near West Jefferson, where it was loaded on to trucks that rumbled through the town toward the landfill.

Jefferson county, where West Jefferson sits, decided the use of the rail spur was a violation of zoning laws, so the transport operation shifted the the nearby town of Parrish, which in turn sought to eject the malodorous cargo. Amid the squabble, the sewage sludge backed up in railcars in Birmingham, causing the mayor’s office to complain about the “death smell.”

“It greatly reduces the quality of life of anybody that this is around,” said Heather Hall, mayor of Parrish. “You cannot go outside, you can’t sit on your porch, and this stuff, it’s here in our town. It’s not like it’s an industrial area.”

The outsourcing of New York and New Jersey’s waste to Alabama revived memories of the “poop train” that ferried New York’s waste to farmers in Colorado until 2012. Since the Environmental Protection Agency decided in 1988 that it was not a great idea to simply pump it into the ocean, where to put New York’s fecal matter has become a constant challenge – the city creates around 1,200 tons of sewage every day.

Billions of gallons of raw sewage still spills into New York harbor each year but the waters around the largest US cities are significantly cleaner than in the 1980s and the metropolis has touted its water treatment processes. Last year, it quietly decided Alabama should be the resting point for some of its waste.

“I guess we are not even as good as the fish, down here in Alabama,” said Nix. “Every state should be responsible for its own waste. We don’t want it dumped here.”

Stung by the outcry, New York has severed its links to Big Sky Environmental, although city officials failed to answer questions on how much sewage was still being transported to other states.

Around 7% of New York City’s treated sewage went to the Alabama landfill, according to a city spokesman, adding that a recent inspection by the Alabama Department of Environmental Management found “no odor or leaks.”

“However, as a precaution and to better understand local concern, we have discontinued utilizing this facility,” the spokesman added.

In Alabama, the avalanche of northern poo is part of a wider concern over the environmental risks faced by residents, particularly the impoverished and people of color. The Big Sky Environmental site can take 25,000 tons of waste a day from all 48 contiguous states. Further south, a landfill abutting the majority African American settlement of Uniontown contains around 4m tons of toxic coal ash and welcomes other debris from 33 states.

“We have a major problem in Alabama in that we are the dumping ground for the nation,” said Nelson Brooke, of environmental group Black Warrior Riverkeeper. “We don’t have a good regulatory system and we have a lot of landfills. We should start setting our sights on protecting communities and our natural resources.”

A spokeswoman for the Alabama Department of Environmental Management said it was undertaking an “in-depth review” of the concerns raised by residents while deciding whether to renew the landfill’s permit.

She added that the department “understands and empathizes with the residents of the nearby communities.”