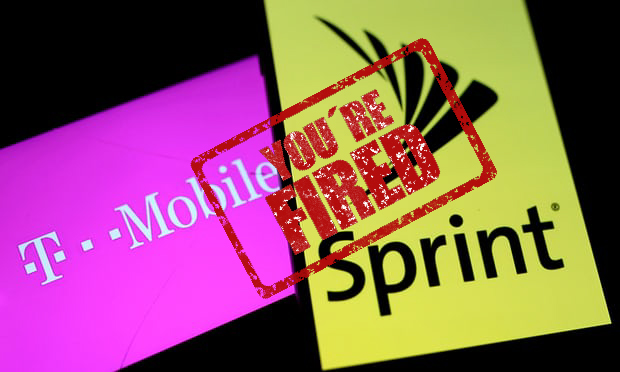 T-Mobile and Sprint said on Sunday they have agreed to combine into one company, reducing the number of major US wireless providers to three.

The deal would create a stronger competitor to the larger AT&T and Verizon and save money by merging networks and closing stores, aiding efforts to build infrastructure and buy rights to the airwaves needed for faster “5G” service that is expected to be up in running within the next few years.

The Communications Workers of America, a union for telecommunication workers, has said the merger will cost at least 20,000 US jobs and reduce competition in wireless, bringing higher prices.

The proposed all-stock deal values Sprint at about $59bn and the combined company at $146bn.

Sprint dropped a bid for T-Mobile more than three years ago after running into concerns about competition under the Obama administration. The companies were poised to combine last October but that deal was called off too.

The new deal will have to be reviewed by the justice department and the Federal Communications Commission (FCC), the agency that oversees phone, broadcast TV and internet service.

The Trump administration has shown a willingness to block deals it believes are not in the national interest. Last year it moved to block AT&T from taking over Time Warner, arguing it would be bad for consumers. In March, the US ended Singaporean chip maker Broadcom’s bid for its American rival Qualcomm on national security grounds.

In September, however, the FCC deemed the wireless market “competitive” for the first time since 2009, which some analysts say could make it easier for Sprint and T-Mobile to combine. FCC chairman Ajit Pai, Donald Trump’s appointee, has not criticized the idea of three national carriers rather than four, as his Obama-appointed predecessor did.

Sprint’s owner, the Japanese SoftBank, has long been looking for a deal as the company has struggled to compete, with large debt and a string of annual losses. The company has cut costs and made itself more attractive to customers, BTIG Research analyst Walter Piecyk said, but it has not invested enough and does not have enough airwave rights for quality service in rural areas.

T-Mobile has been on a years-long streak of adding customers. After the government blocked an AT&T attempt to buy it in 2011, it led the way in implementing changes such as ditching two-year contracts and bringing back unlimited data. Consumers are paying less thanks to resultant price wars.

“T-Mobile does not need a merger with Sprint to succeed but Sprint might need one to survive,” Piecyk wrote in a research note.

MoffettNathanson analyst Craig Moffett said T-Mobile’s momentum was slowing, which may explain why it and its parent, Germany’s Deutsche Telekom, “have warmed to the idea of a merger sooner rather than later.”

AT&T and Verizon are becoming more like media and cable companies, both testing a type of home wireless that could be as fast or faster than cable.

AT&T, the country’s biggest TV provider since its purchase of DirecTV, is facing a lawsuit from the justice department related to antitrust concerns over its deal for Time Warner, parent company of HBO, CNN and the Warner Bros movie studio. To lure wireless customers, AT&T offers discounts on DirecTV and could soon do so with HBO.

Verizon bought the once-pioneering internet companies Yahoo and AOL. It hopes to compete with Facebook and Google for advertising dollars.