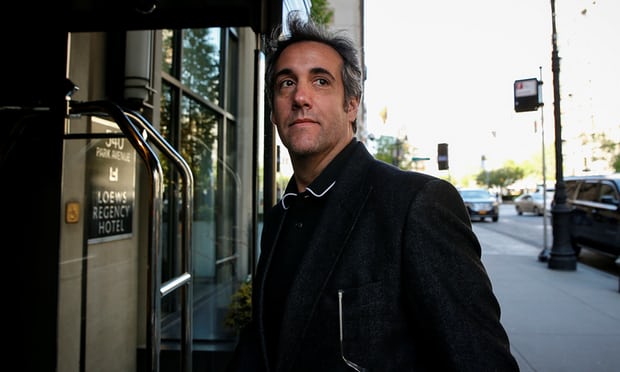 The disclosure that Donald Trump’s legal fixer Michael Cohen was quietly paid hundreds of thousands of dollars to advise corporations highlights the inability of US laws to prevent secretive “shadow lobbying,” analysts said.

Companies such as AT&T and Novartis confirmed they paid Cohen, the president’s personal attorney, large sums last year in return for what they describe as guidance on navigating the new administration.

As Cohen said he provided consultancy services rather than lobbying, which involves directly advocating for a client to government officials, he was not required under US law to register as a lobbyist and disclose the payments in public filings.

Cohen and his attorney, Stephen Ryan, did not respond to requests for comment on the arrangements.

Federal authorities in New York have said Cohen, 51, is the subject of a criminal investigation relating to his personal business and financial affairs. No allegation has been made relating to Cohen’s consultancy work.

Professor James Thurber of American University, who has researched lobbying for decades, said it was too easy for influential people in Washington to make money around the legislative process without informing the public, in what is loosely termed shadow lobbying.

“If someone is trying to influence government policy and is getting paid for it, they should register,” said Thurber, who said that as well as being fundamentally weak, the Lobbying Disclosure Act was also not enforced aggressively enough.

The 23-year-old law states that anyone who spends 20% of their time lobbying in a three-month period, and is paid to lobby public officials twice or more, must register as a lobbyist and identify their clients. Ethics experts have consistently said this language makes it too easy to technically avoid that threshold.

“You get paid to tell the client how to lobby, or what the important people are thinking, or who to call on what topic,” said Daniel Auble, a senior researcher at the Center for Responsive Politics. “Anything like this is allowed without disclosure.”

AT&T employs a small army of registered lobbyists to advocate for it on Capitol Hill, in Trump’s White House and at agencies such as the Federal Communications Commission. The company has spent more than $28m on federal lobbying in 2017 and 2018, according to congressional filings.

But the company has confirmed it also paid Cohen’s company Essential Consultants for “insights into understanding the new administration” beginning in early 2017, when Trump was inaugurated. AT&T paid Cohen $200,000 in four installments, according to a document published by an attorney for Stephanie Clifford, the pornographic actor known as Stormy Daniels, who is battling Trump and Cohen in the courts.

Trump’s administration was last year considering whether to allow an $85bn merger of AT&T and Time Warner. The justice department announced in November that it would seek to block the merger, a decision that the companies are fighting in court. The administration was also working on reforms to rules on net neutrality that directly affect AT&T.

Henry Su, a former attorney for the Federal Trade Commission and now a partner at Constantine Cannon in Washington, said it was unusual for a company to approach someone closely linked to an incoming administration so quickly and directly.

“Typically a company will wait for the administration to be in place. There are official channels to do this, usually through the transition team,” he said, adding that the Essential Consultants setup “looks more and more like the swamp Trump said he was going to drain.”

While the extent of shadow lobbying is by its nature difficult to quantify, ethics campaigners and others have pointed to a steadily declining number of official lobbyists as proof that influence is increasingly being pushed in secret.

Having reached a modern-day peak of 14,824 in 2007, the number of registered lobbyists had by last month fallen to 9,443, according to congressional records, following some tightening of the rules under Barack Obama’s administration.

Paul Miller, president of the National Institute For Lobbying & Ethics, a lobbying trade group, said of this decline in numbers last year: “The simple reality is people are reclassifying what they do as not direct lobbying and thus they are no longer covered by the Lobbying Disclosure Act.”

Two other companies that paid Cohen have in recent years decided against paying registered lobbyists to advocate for them in Washington. According to public filings, Columbus Nova has not done so since paying McGuireWoods $16,000 in 2010 to lobby on business regulations.

Columbus Nova is the US affiliate of a corporate empire belonging to Viktor Vekselberg, a Russian oligarch closely linked to Vladimir Putin. The company confirmed it hired Cohen “as a business consultant regarding potential sources of capital and potential investments in real estate and other ventures” and said Vekselberg was not involved. Avenatti said the company paid Cohen almost half a million dollars.

KAI has not used a registered lobbyist in Washington since paying American Defense International $20,000 in February 2002, according to congressional filings.