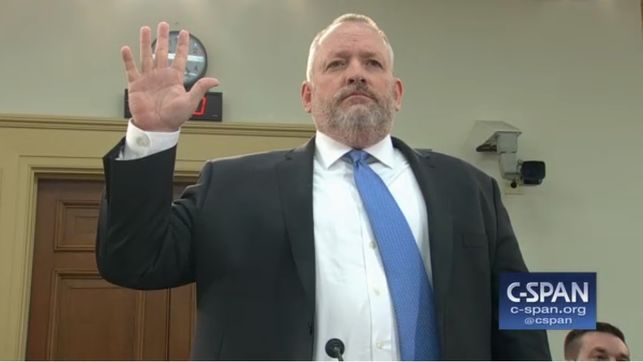 Testifying before Congress last week, Drug Enforcement Agency (DEA) acting administrator Robert Patterson claimed that marijuana leads to opioid addiction. But when he prompted to provide evidence in support of the agency’s position, he acknowledged that he could not.

His failure to substantiate this claim is unsurprising. That is because numerous peer-reviewed studies show that increased cannabis access is associated with declining rates of opioid use, abuse, hospitalizations, and mortality. Among patients enrolled in state-sanctioned medical marijuana access programs, participants’ use of not only opioids, but also their use of numerous other prescription medications — such as anti-depressants and anti-anxiety drugs — declines significantly.

According to one recently published study, “National overall reductions in Medicare program and enrollee spending when states implemented medical marijuana laws were estimated to be $165.2 million per year.” In Canada, where medical cannabis access is legal federally, recently published data reports that over half of trial subjects were able to cease their use of opioids within six-months of enrolling in Health Canada’s cannabis access program.

One might expect the administrator of the nation’s chief drug enforcement agency to be aware of at least some of this data. But Patterson’s testimony proved otherwise.

Specifically, when asked by Florida Republican Matt Gaetz if the DEA was aware of the landmark 2017 National Academy of Sciences study finding, “There is conclusive or substantial evidence that cannabis [is] effective for the treatment for chronic pain,” Patterson answered that he was not.

He further acknowledged that he was unfamiliar with several state-specific, longitudinal studies, such as those from Minnesota and New Mexico, finding that chronic pain patients who register to partake in cannabis therapy dramatically decrease their use of opioids and other pain-relieving drugs. (Separate assessments of state-authorized medical cannabis patients in Illinois, Michigan, New York, and elsewhere affirm these conclusions).

He further claimed ignorance with regard to the findings of a highly publicized study in the Journal of the American Medical Association finding that medical cannabis regulation is associated with year-over-year declines in overall opioid-related mortality, including heroin overdose deaths.

Moreover, when pressed to provide evidence — any evidence — in support of the DEA’s questionable position, Patterson readily admitted that he knew of none. In fact, upon further questioning, he acknowledged that the DEA has, to date, never even so much as reviewed the issue. He further suggested that those patients seeking an alternative to opioid analgesics may wish to try “Tylenol.”

Rep. Gaetz: “You’re the acting administrator of the DEA. You cannot cite a single study that indicates that medical marijuana creates a greater challenge with opioids, and you’re unaware of the studies, including studies from the National Academies of Sciences, that demonstrate that medical marijuana can be an acceptable alternative to opioids. Is that what I’m understanding?”

At a time when tens of thousands of Americans are dying annually from their use of opioids, it is almost inconceivable that the DEA would willfully and publicly maintain such a Flat Earth position with regard to the use of medical cannabis as a potential alternative. Their failure to acknowledge basic and readily available facts and science is once again indicative of the reality that the DEA, admittedly, is an agency that places political ideology above all else.

As a result, pundits and legislators — particularly those at the federal level — should no longer give deference to the DEA’s cannabis-specific public policy agenda. Rather, they should view the agency as an artifact of a bygone era, whose positions and opinions are increasingly out-of-touch with the emerging scientific, political, and cultural consensus.