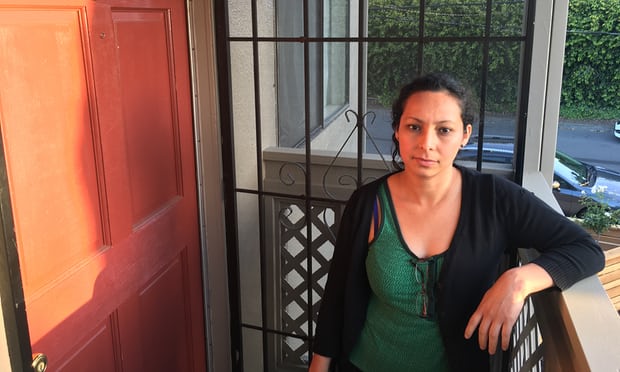 Sandra Zamora is quitting Facebook. Not because of Russian election interference, misuse of personal data or any of the social network’s other scandals.

For the 29-year-old, it’s personal: Facebook is her neighbor, and the company’s presence, she said, is wreaking havoc on her community.

Zamora is part of a group of Menlo Park tenants in four buildings facing massive rent increases from a new landlord, who is pricing out longtime residents.

while advertising the buildings’ proximity to Facebook’s campus. Zamora is holding out as long as she can. But she knows she will soon have to leave her home of 11 years, and she doesn’t know where she will go.

“Facebook is taking everything we have … and giving us what? Nothing. Just pain in our lives,” said the pre-school teacher and restaurant worker, seated inside her dimly lit apartment, a mile from the company’s headquarters. “Facebook is just ruining the community.”

The displacement of working-class and low-income Latino families in the shadow of Facebook’s behemoth campus, which is undergoing a major expansion adjacent to their homes, offers a stark illustration of California’s housing crisis and expanding income inequality. By many measures, the tech industry has in recent years exacerbated the crisis of evictions, homelessness and poverty.

A group of affiliated real estate companies, including Menlo Gate and Redwood Landing Properties, purchased and began managing the 20 apartments now facing sharp rent increases – using a process that tenant activists say is cruel, but increasingly common. The firms, linked to the investor Jesshill Love, sent notices to tenants saying their rents would soon rise from $1,100 to $1,900 a month, and that they would have to leave in 60 days if they didn’t sign a lease.

The anxiety took an immediate toll on Teresa Rivas, 64, who has lived in her apartment on the quiet suburban street since 1992. “I’m very stressed. I have a lot of headaches,” said the housekeeper one recent evening, noting that she often wakes up at 3am and can’t fall back asleep, her mind racing. “I’m feeling so tired, thinking about, what am I going to do?”

After the notices arrived at their doors, some residents formed a tenants’ union to fight back. They quickly learned, however, that they had few legal recourses – and no rent control protections. The hikes were especially painful considering their living conditions, said the tenants, who described cracks in the walls, poor lighting, dirty carpets and infestations of roaches and rodents.

Eisabel Coronel, 48, said that as soon as she explained the situation to her daughter, the 10-year-old became distressed about leaving: “She says, ‘My school is here. My teachers are here. My friends are here’ … It’s very sad and scary.”

Ricardo Colin, Coronel’s 24-year-old son who also lives in the apartment, said he keeps searching for cheaper alternatives, but can’t find anything. The computer engineering student already does part-time janitorial work to help pay rent and said he might have to drop his studies and get a full-time job.

Or they may have to leave the region, a pattern Colin has observed for years: “I’ve lost many friends because of the rents and because of Facebook.”

Community Legal Services in East Palo Alto, a local not-for-profit, represented the tenants and negotiated a short delay in increases, though they still have to pay the $800 hike, plus roughly $100 in new monthly utility bills. For some, the rates are insurmountable.

“It is a completely unjust situation, even if what’s happening to these people may be legal,” said Daniel Saver, an attorney for the tenants.

At least seven families vacated last month, according to the tenants.

Their small Menlo Park neighborhood is “ground zero” for the crisis, said Karen Chappel, professor of city and regional planning at the University of California, Berkeley: “It’s one of the very tightest housing markets in the country.”

That’s due in part to the fact that local governments did not prepare for the extreme housing demand and the rapid gentrification of the suburbs, she said. One recent estimate suggested the surrounding county has a shortage of nearly 26,000 affordable homes for low-income renters. A survey also found that only 21% of displaced households stayed in the same neighborhood, and that one in three experienced some period of homelessness or marginal housing.

Luis Carriel, 38-year-old father of three who works two kitchen jobs and has been living in his apartment for a decade, said he would like to see Facebook’s CEO, Mark Zuckerberg, step up in some way. “We don’t work for Facebook … Why do we have to pay the high price?”

Zamora said the disproportionate impact on Latinos and African Americans in the neighborhood was evident to locals: “They are displacing us. They are pushing us away. Is this purposeful?”

Lilian Flores and her fiance are preparing to move out from their apartment, which has been in her family for 10 years, because they can’t afford the new rents. For now, they are moving into a single bedroom in someone else’s house as they try to pay off debts and save up.

Eventually, she said, they would likely have to leave the area altogether, even though her family remains in Menlo Park and East Palo Alto where she grew up. She said she was considering relocating to Modesto, a city 90 miles away, and that it was sad to think that her children would not go to the same schools she once attended.

“We’ve been here for so long,” she said, “and they just really don’t care.”