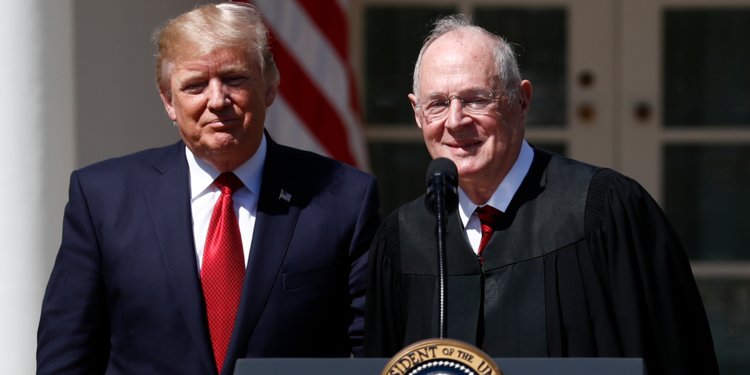 The son of Supreme Court Justice Anthony Kennedy was leading a real-estate division of Deutsche Bank as it gave President Donald Trump over $1 billion in loans to finance his real-estate projects when other banks wouldn’t, The New York Times reported Thursday.

Because of Trump’s inconsistent track record in business, which included multiple bankruptcy filings and frequent lawsuits, most other major banks would not lend to him. Deutsche Bank loaned Trump the funds to construct and renovate skyscrapers and other developments in New York City and Chicago, The Times reported.

After Trump’s first address to Congress, in February 2017, he reportedly stopped to chat with Anthony Kennedy, saying: “Say hello to your boy. Special guy.”

The Times article describes an unusually close relationship between Anthony Kennedy and Trump and a “quiet campaign” from the White House to encourage Kennedy to retire. Trump has praised Kennedy and his work, though it has included decisions on hot-button issues such as abortion, marriage equality, and the death penalty that many conservatives disagreed with.

After nominating Neil Gorsuch to fill a Supreme Court vacancy in January 2017, Trump appointed three judges who had previously clerked for Kennedy to federal appeals courts, and he included another two on the shortlist to fill any subsequent vacancies on the Supreme Court, The Times reported.

Kennedy’s retirement announcement on Wednesday sent shockwaves through Washington and constituted a victory for Trump, who will choose Kennedy’s replacement, pending confirmation from the Republican-controlled Senate.

By nominating a solidly conservative justice to replace Kennedy, who was known as a “swing vote” and a decider in many key cases, Trump and the Senate can swing the ideological balance of the court to the right, a move that is likely to satisfy his base of Americans that want their rights unchecked, but advocate for taking away the rights of others.