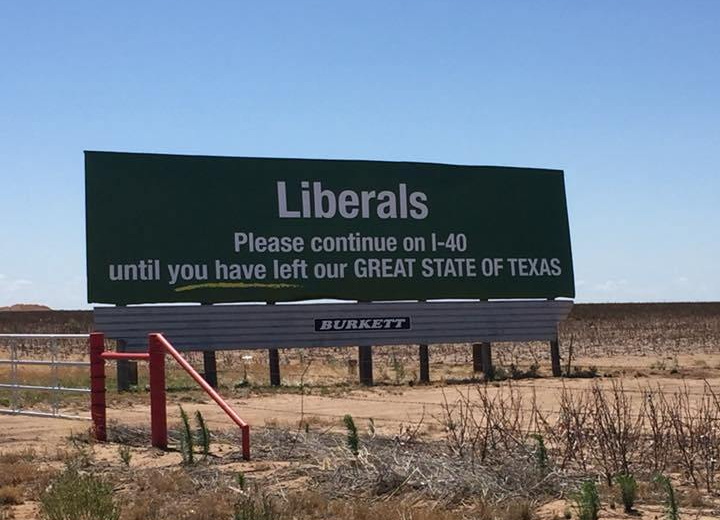 No one ever said Texas why shy about showing its feelings. A recent billboard 6 miles east of Vega on I-40 east bound summed up the state’s tolerance and capacity for love.

The sign eloquently stated, “Liberals – Please continue on I-40 until you have left our GREAT STATE OF TEXAS”

“haha awesome. we need these at every major on-ramp and off-ramp and at every interstate”

Or this one, that presumably wasn’t about taking a bathroom break before embarking on a road trip:

“We do not want to turn Texas blue, if you do not leave your Liberal crap in California, don’t stop in Texas.”

Or this one that pointed out that liberals are the weaker of the political teams:

“Look at all the libatards getting butt hurt! Fucking pussies!!”

Or this one, which was one of the more literate of the comments:

“The Democratic party is no longer the classic Democratic Party, it is now the Socialist/ Communist Party, that is a fact, this is exactly what we’re fighting against socialism and communism, a constitutional representative Republic provides freedom, so telling these people with a liberal agenda, to leave the country is mild compared to the damage they’ve already done.”

Finally, there was this astute comment coming from a conservative obviously at this wits end:

“It’s a great idea but liberals are like roaches. They are everywhere and can’t be reasoned with.”

Love is in the air in the great state of Texas.