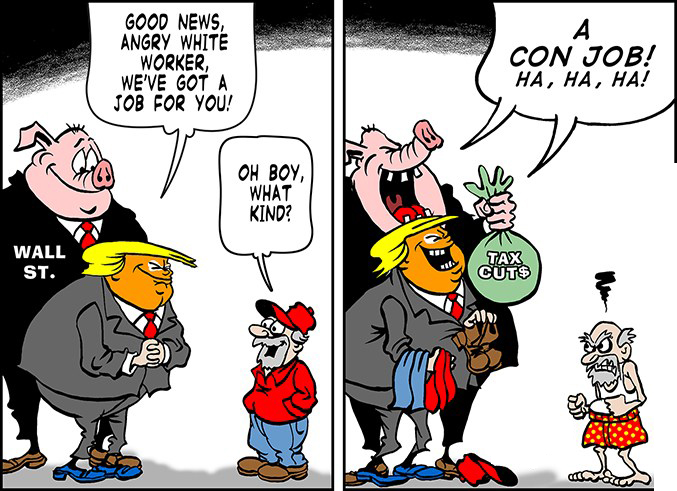 Donald Trump used an address at the White House on Friday to tout his six-month-old tax cut package and its effect on the US economy, in what became a falsehood ridden victory lap to mark the passing of the tax cut bill last December.

“Six months ago we unleashed an economic miracle by signing the biggest tax cuts … in American history,” Trump said.

The pompously named “Tax Cuts and Jobs Act” reduced the corporate tax rate from 35% to 21% – the biggest such cut in history – and lowered the tax rate for top earners from 39.6% to 37%. Most taxpayers either saw no decrease in their taxes, or will see them go up.

Trump made a series of exaggerated claims about the US economy, which has continued on a trajectory of growth that began in Barack Obama’s first term. He also skipped recent signs of less healthy developments.

US gross domestic product grew at 2% in the first quarter, the commerce department said on Thursday, missing an earlier estimate of 2.2% growth.

Meanwhile, an escalating trade war set off by Trump’s aluminum and steel tariffs, which have been reciprocated by the country’s largest partners, including Canada, Mexico, the European Union and China, could stall the economic engine, economists warn.

According to a forecast by economists at Oxford Economics, the tariffs, which are already squeezing farmers in the midwest, could cost hundreds of thousands of jobs.

Analysts also warned that the tax cut was designed to benefit the wealthiest Americans, including Trump personally. In fact, 80% of the tax breaks go to the top 1% of taxpayers.

But it has nonetheless proven popular among Republicans whom presumably don’t like to think about things like facts, but instead rely on their gut instincts.

The legislation also increased the amount that can be passed tax-free to heirs and, in a blow seemingly aimed at blue states with high taxes such as New York and Connecticut, eliminated significant state and local tax deductions.

Economists have warned that the cuts will blow up the national debt – despite Republican austerity talk.

Republicans have claimed Americans in all lines of work, including low-wage service jobs, have reaped the benefits of the tax cut. But those cuts will expire after Trump is out of office, and then those lower and middle income Americans will see their taxes go up. Meanwhile, the tax cuts for corporations and the wealthiest Americans never expire.