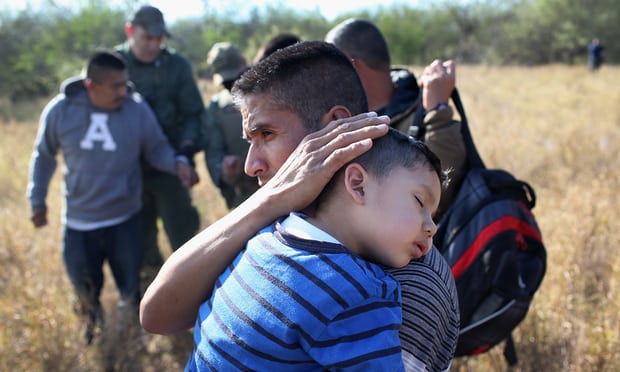 Elba Luz Domínguez’s voice cracks over the phone line from El Salvador. The memory of wading the river up to her waist between Mexico and the US with her daughter, then promptly being shackled by US border patrol and her daughter taken away, brings her to tears. Worse, despite fleeing appalling violence, after months in detention she was deported back home – without her child.

Donald Trump’s “zero tolerance” immigration policy requiring the arrest of anyone caught crossing the border without authorization led to traumatic family separations and widespread political uproar. But it had not even been announced when Domínguez and Joselin, 16, were separated last fall.

As she waited by the river, Domínguez recalls a US agent saying: “You’re going to jail and she’s going to a shelter.”

Domínguez, 49, suffers from diabetes, and the shock of arrest spiked her blood sugar and distorted her heartbeat, she said in a recent interview.

So the mother and daughter were first taken to the hospital in El Paso.

But then Domínguez was jailed awaiting trial while Joselin was taken away to a shelter for migrant children. That was October 2017, and Domínguez hasn’t seen her daughter since. They had been fleeing violence that left Joselin’s young dance troupe partner murdered, and threats that followed the girl from school to school.

On 7 February, Domínguez was deported back to El Salvador. And after months in a shelter and Joselin was eventually sent to Houston, Texas, to live with her father – whom she had not seen since she was less than two years old.

Domínguez had hoped she and Joselin would travel north together and trace another of her daughters, who lives in South Dakota.

Now she is one of five parents from Central America who were separated from their offspring and, after being randomly tried simultaneously in court, have joined together in a lawsuit appealing their misdemeanor convictions as unconstitutional. Four of the five have been deported and were obliged to leave their children behind in the US.

At their joint criminal trial in El Paso last December, the five parents had protested their innocence. First they told magistrate judge Miguel Torres their lives would be on the line if they were deported. Then they demanded the judge tell them the whereabouts of the five children, aged between eight and 16, who had been separated from them upon crossing the border, and exhorted him to reunite them – all to no avail.

Before convicting the five parents and sending them to immigration detention prior to the deportation process, Torres said: “I lament it more than you that I am unable to give you any information regarding the whereabouts or wellbeing of your children.

“I can see it on your faces, and I can hear it in your voices that you’re concerned.”

The federal public defender representing the five parents in the trial and the ongoing case, Sergio García, told the Guardian he may have to go all the way to the supreme court to overturn the adults’ convictions.

One of the five parents, Maynor Claudino, 39, came to the US from Honduras last year with his son Henry, 11.

In 2016, gang members murdered Claudino’s uncle when he challenged them for stealing his cattle, decapitating and castrating him, Claudino said.

“I recovered my uncle’s body from the mountain. Then I had to walk behind his coffin. My cousin and I were both threatened and I was afraid they would recruit my son,” he said. His wife and daughter moved to another city and his cousin is in hiding.

The father and son crossed into the US last September, after traveling thousands of miles through Mexico. “We only had our clothing. We had no money, nothing,” he said. “We slept rough on the street, and I never slept because I was worried about my son.”

Claudino aimed to work as a driver and allow his son to study in Los Angeles, where they have relatives. When they forded the river between Ciudad Juárez, Mexico, and El Paso, Claudino tried to tell the US officials who intercepted them that turning back would mean death.

“The border patrol agent cut me off and would not let me talk. He told me the United States is as dangerous as Honduras – [that] gangs will recruit my son and make him sell drugs here,” Claudino recalls. The son wept as his father was handcuffed and they were separated.

Claudino was deported in early January, having not seen his son Henry since late October.

“They took my son from me,” he said. He spoke to the Guardian by phone from Honduras, where he, too, is now in hiding and must move around constantly.

“The Mara [Salvatrucha, AKA MS-13] governs Honduras. They are strong. They are well-armed. I am terrified. I cannot stay in one place,” he said.

Henry was left behind at a Texas shelter. A social worker contacted Claudino’s brother Enrique and his wife Lucía, in Los Angeles, and the couple agreed to take their nephew into their home. “We first spoke to our nephew when they deported Maynor,” said Lucía.

But before Henry could be released to his relatives in California, the shelter asked Enrique and Lucía to pay $1,200 to cover a round-trip plane ticket for the social worker and a single for the child. “I had to deposit the money in a bank account. The first time I saw the child was at the airport,” Enrique said.

“It’s just like he fell here,” Lucía said. “Can you imagine at that age how it is to live with people you don’t know? He longs for his father, but they did not even let them see each other before deportation. It’s unjust,” Lucía said.

Back in Honduras, Claudino said he’s been told his once bubbly son is now withdrawn. “He doesn’t talk much. I know he’s traumatized,” he said.