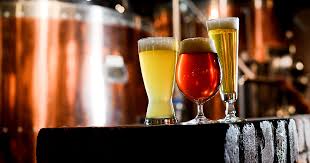 Facing pressure from an increasingly crowded craft beer market, Lagunitas Brewing Co. announced this week that it is laying off 12 percent of its workforce, more than 100 employees companywide.

The California-based brewer, which operates a production plant in Chicago, posted a letter on its website from CEO Maria Stipp explaining the decision, which affects all departments across the country.

“The craft beer market is rapidly evolving and, in many ways, more challenging,” Stipp said. “We are dedicated to weathering the storm, to continue to be successful both in the U.S. and globally. In order to do that, we took difficult but necessary actions.”

The company has about 900 employees across the country, Lagunitas spokeswoman Katie Brown said Thursday.

Employees were notified Tuesday, according to the letter.

Lagunitas, best known for beers like Lagunitas IPA and Lil Sumpin’ Sumpin’ Ale, was launched in 1993 by Chicago native and home brewer Tony Magee in his California kitchen.

The main production facility is in Petaluma, Calif., and the Chicago plant opened in 2014 in the Douglas Park neighborhood on the city’s West Side.

Lagunitas sold a 50 percent stake in the company to Heineken International in 2015 for a reported $500 million. Heineken bought the rest of the company in 2017 for an undisclosed price.

The craft beer segment has been growing in recent years, with more players entering the game and big brewers swallowing them up. Retail sales of craft beer increased by 8 percent to $26 billion last year, accounting for nearly a quarter of the total U.S. beer market, according to the Brewers Association, a not-for-profit trade association for small and independent craft brewers. Overall U.S. beer volume sales were down 1% in 2017.

“While more mature, the market continues to show demand for small and independent craft brewers,” Bart Watson, chief economist for the Brewers Association, said in an online post. “There are certainly industry headwinds, but this stabilized growth rate is reflective of the market realities that exist for brewers today.”

In her letter, Stipe said “more breweries, more choices” has created pressure for the craft beer segment and Lagunitas, resulting in the layoffs.

“Lagunitas has been built on our determination to look to the future for the good of our people and consumers alike,” Stipe said. “We believe these changes put us in a position to meet the future head-on, with a team that is well-suited to get us there.”