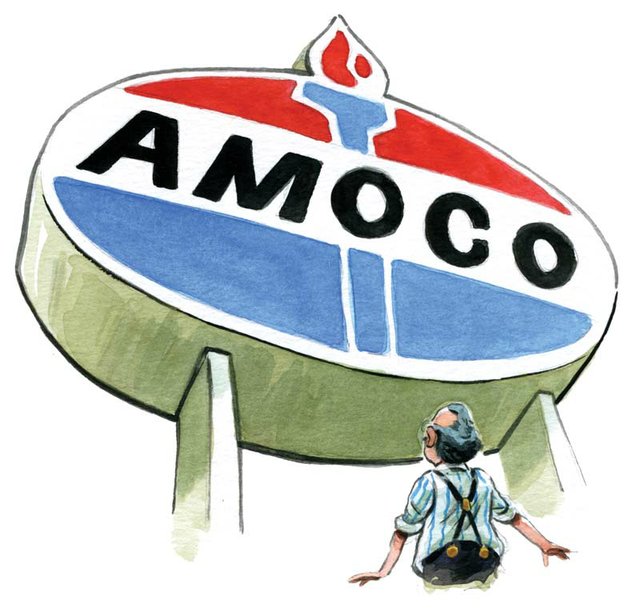 Amoco, the iconic red, white and blue gas stations that disappeared nearly 20 years ago after the company’s merger with BP, are beginning to pop up once again in a handful of markets.

Six stations have erected the once ubiquitous Amoco torch sign this year in Chicago and the suburbs, with another 10 expected to open over the next few months. Locations include Glenview, Aurora and Chicago, where the city’s first new-generation Amoco opened last week.

Reintroduced late last year in New York, the Amoco brand has 36 stations up and running nationwide. Within several years, there could be 100 in Chicago alone, Altizer said.

The revival of the Amoco brand is both a nostalgic road trip down memory lane for older drivers and a way for BP to pack more stations into an area. Having a separate brand name enables the company to put an Amoco station next to a BP station without confusing consumers.

The stations will sell the exact same gas, promote BP credit cards and offer the same loyalty rewards, but the pumps and signs are designed to encourage increased business and consumer preference for both brands.

There are 6,400 BP stations across the U.S., all of them operated by independent dealers after the company divested of its last corporate-owned stores about 15 years ago.

Most dealers buy their gas from jobbers, middlemen who distribute a variety of brands to stations in their area. Having a separate brand gives BP flexibility to service more stations, particularly in densely populated metro areas like Chicago and New York.

Other oil companies use multiple brands to locate adjacent stations. ExxonMobil, which was formed by a 1999 merger, still has ostensibly competitive Exxon and Mobil stations side by side in some markets, for example.

Amoco was founded in 1889 as the Standard Oil Company of Indiana, with its first refinery in Whiting, Ind. It has branded its stations with a variety of names over the years, including American and Standard, but it was known exclusively as Amoco when BP, then British Petroleum, acquired the company in 1998 for $48 billion.

At the time of the merger, there were more than 9,000 Amoco stations across the U.S. But a decision to shelve the name in favor of the BP brand marked the end of the road for the Amoco brand in the early 2000s.

In addition to the name change, the company scaled back its dealer network, shedding smaller former Amoco stations that didn’t fit the high-traffic business model. Other Amoco dealers left of their own accord.

In 2010, there was a movement among dealers to revert to the Amoco brand in the aftermath of BP’s handling of its massive oil spill in the Gulf of Mexico, which led to consumer boycotts and sales declines. That didn’t get enough traction to kill the BP brand or bring back Amoco, but executives believe now is the time for both to exist on separate tracks.

Most of the Amoco stations will be rebranded from competitors. Existing BP stations will not be allowed to convert to Amoco, Altizer said.

“One of the guardrails we have is we’re not going to convert existing BPs over to Amoco,” he said.

Amoco has never completely disappeared, with a tiny label on the BP pumps paying homage to the legacy gas being dispensed.

Nostalgia is certainly expected to play a big part in luring older drivers to fill up at Amoco stations, Altizer said. But even younger consumers have been drawn to the newly renovated, red, white and blue stations.

“The consumer response has been very positive, even for those millennials who weren’t even around or couldn’t remember Amoco,” he said. “Certainly their parents do, their grandparents do.”