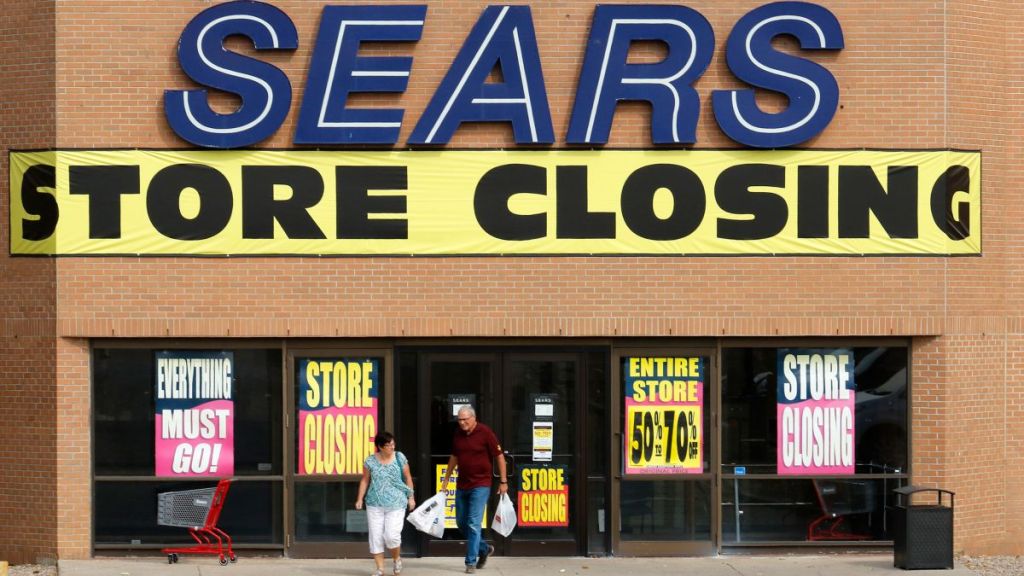 There are many reasons why Sears Holdings Corp. ended up filing for bankruptcy. Whether it can grab a slim path forward and succeed as a smaller version of itself is anyone’s guess.

When it was announced that the Chicago-based retailer — once the biggest in the world and the pride of Chicago — would seek Chapter 11 bankruptcy protection, no one who follows the company was surprised. Sears Holdings also announced CEO Edward S. Lampert, the largest shareholder, would step down from that role but will remain chairman of the board.

In a statement, Lampert said bankruptcy protection will give Sears Holdings “the flexibility to strengthen its balance sheet, enabling the Company to accelerate its strategic transformation, continue right-sizing its operating model, and return to profitability.”

The moves don’t mean Sears is finished — Lampert has said stores are looking forward to welcoming holiday shoppers — but succeeding in the current retail environment, even as a smaller company, will be tough, said David Stowell, a professor of finance at Northwestern University’s Kellogg School of Management.

“I think they have a shot at it,” Stowell said. A lot depends on whether the company brings in new management that has the freedom to work creatively, he said.

Others were not so optimistic.

James Dion, a Chicago-based retail consultant who worked for Sears as a senior buyer in the late 1970s and early ’80s, described Sears and Kmart as “dead man walking” companies whose real estate is worth more than the brands.

It will be hard to get shoppers excited about a new Sears, Dion said.

“The likelihood of them coming back leaner and meaner is kind of slim to none,” he said.

Neil Saunders, managing director of GlobalData Retail, wrote in a note to investors: “In our view, too much rot has set in at Sears to make it [a] viable business.”

The company announced Monday it has secured $300 million in financing from banks to maintain operations through bankruptcy. It is negotiating an additional $300 million loan from Lampert’s ESL Hedge fund.

The bankruptcy filing listed between $1 billion and $10 billion in assets while liabilities range between $10 billion to $50 billion. It listed the Pension Benefit Guarantee Corp., the federal agency that insures pensions, as Sears’ biggest unsecured creditor, but noted the amount it owed the agency was “unknown,” according to court documents.

The rise of Sears

Walking through a Sears store now, it’s easy to forget what an innovator it once was.

Before there was Amazon — or, for that matter, Home Depot or Walmart or Kmart — there was Sears. From its beginnings as a mail-order watch business in Minneapolis 132 years ago, the company grew to become America’s everything-under-one-roof store and the biggest retailer in the world.

For generations of Americans, the Sears, Roebuck and Co. catalog was a shopper’s “bible” of clothing, toys, housewares and hardwares.

“It was the Amazon of its day,” said Mark Cohen, a professor of retailing at Columbia University and a former Sears executive.

Sears was born in 1886, when Richard W. Sears began selling watches to supplement his income as a railroad station agent in North Redwood, Minn. By the next year, he had opened his first store in Chicago and had hired a watchmaker named Alvah C. Roebuck.

The company published its first mail-order catalog in 1888. Together with companies like Montgomery Ward and J.C. Penney, Sears helped bring American consumer culture to middle America.

Sears sold just about anything. Between 1908 and 1940, the company sold about 75,000 build-from-a-kit houses, many of which are still standing.

For generations, Sears was an innovator in practically every area, including home delivery, product-testing laboratories and employee profit-sharing.

By the late 1960s, Sears was the world’s largest retailer and in 1973, its headquarters in Chicago moved into the world’s tallest building.

Where it went wrong

Between 1981 and 1985, the company went on a spending spree, acquiring the stock brokerage Dean Witter Reynolds and the real estate company Coldwell, Banker. It also launched the Discover card.

It eventually ditched those financial businesses, but problems remained.

In a case of terrible timing, the company dropped its catalog business in 1993, just a few years before the dawn of internet shopping.

If it had stayed in the game, it might have harnessed its customer base, diverse product categories and nationwide warehouse and distribution system to beat Amazon to the punch, Dion said.

“Sears missed that window by about four years,” he said.

The arrival of Lampert and the acquisition of Sears by formerly bankrupt Kmart to form Sears Holdings Corp. in 2005 — though lauded by analysts and the stock market — didn’t work out. The merger was intended to leverage economies of scale but never really accomplished that.

There were other decisions that looked bad in retrospect, analysts say, such as selling off the Craftsman and DieHard brands. Soon, many customers had little reason to go into a Sears store.

“It was some bad luck, bad timing but clearly some questionable management decisions,” Stowell said.

Stowell said even though people like to blame online shopping for Sears’ trouble, the truth is more complicated. Walmart and Target, for example, faced the same pressures but didn’t experience the same problems.

Overly leveraged from the Kmart deal, Sears was able to prop up its stock for a while by cutting and selling off assets, but eventually there wasn’t enough cash to support all that debt.

Some consumers took to Facebook on Monday to express sadness over the announcement, feeling a part of Chicago’s — and the country’s — retail history was slipping away.

Cassandra Jensen of Park Forest said Sears was a big deal during her childhood.

“Right before Christmas, my mom would get the big catalog and all of us kids would circle what we wanted,” said Jensen, who continued to stick with Sears even when the closest store to her, in Matteson, closed down a few years ago. “Sears is just ingrained in our history.”

But on Monday, Jensen’s sentimentality was replaced by anger, when a Sears delivery person failed to show up for the second time with a dishwasher she ordered. After numerous calls to customer service, she learned the model she paid for was discontinued.

Now she’s hoping she gets her money back, almost $500.

Steve Bernas, president of the Better Business Bureau of Chicago, advises consumers who have unused gift cards to use them — and to pay off any layaway items.

“Regardless of the business, never sit on those gift cards,” Bernas said.

As for all those Sears appliances, garage door openers and other expensive purchases, experts say there will always be someone to service them, whether its Sears or perhaps someday, a company that buys its repair business.

Ron Olbrysh, who heads the National Association of Retired Sears Employees, has been fielding questions from concerned seniors who used to work at Sears. The group represents about 94,000 former Sears and Kmart workers.

On Monday, Olbrysh was still trying to get an answer on the status of retirees’ life insurance benefits.

In a letter to retirees Monday, the company promised that pension benefits will continue to be paid monthly and said 401(k) savings are held in a trust. Health care plans for retires are not expected to be affected.

“It was very, very sad,” Olbrysh said of the bankruptcy announcement. He worked in the Sears law department from 1972 to 1996, including as associate general counsel. “I’m sort of optimistic that Sears will survive,” he said, even though there will be fewer stores that are smaller in size.

Worker pensions will be covered by the Pension Benefit Guarantee Corp., the government entity that props up private pensions when companies can’t fund them.

However, PBGC payments are capped by law — the maximum yearly benefit in 2016 was $60,136 — so people who earned much higher benefits will see cuts.