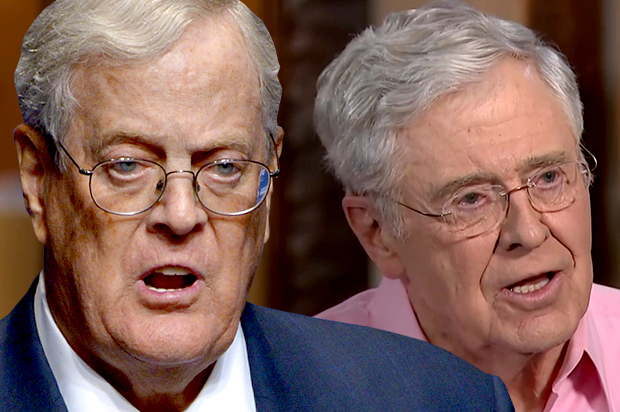 Politically powerful billionaire Charles Koch will not lobby for President Donald Trump if he runs for re-election the 2020 contest, Time reported. But the Koch donor network will advocate for establishing permanent legal status for Dreamers, undocumented immigrants brought to the U.S. as children.

Koch will also focus his immense influence on gubernatorial and congressional races, prioritizing issues including poverty and drug addiction, the article said.

“We are making significant investments to unite the country and address critical issues that will help people improve their lives,” Koch spokesman James Davis told Time. “This starts with a major new initiative to fight poverty in America, and following on the success of the First Step Act in December continuing to build broad-based policy coalitions on issues from education reform to immigration. These will include a significant investment to support policy champions in Senate, House and state races. This is where we can make the biggest difference for millions of Americans.”

Charles and David Koch have long wielded their enormous wealth to support far-right politics but did not overtly promote Trump during the 2016 election. They have recently been attempting to re-brand themselves as more benevolent.

Koch Industries, which The New Yorker’s Jane Mayer called a “fossil-fuel leviathan,” amassed $100 billion in revenue in 2017, according to BBC News. The multinational conducts business in disparate realms, including finance, agriculture and electronics.

Charles and his brother, David, held a significant role in shaping the fiscally conservative Tea Party movement, which gained traction in 2010.

A Greenpeace investigation said that Koch industries was funding 35 libertarian and conservative organizations and over 20 legislators to spread inaccurate information about climate change science, The Guardian reported in 2010. The report from the environmental organization said the Kochs had also funded prominent think tanks, who were involved in promoting doubts about the veracity of global warming.

After President Donald Trump withdrew from the Paris Climate Accord in 2017, prominent political figures including former Secretary of State John Kerry, criticized the Kochs, according to The New Yorker.

“Our criminal justice system has been a huge barrier to opportunity for millions and millions people for the last 30 to 40 years. So, we see the criminal justice system as a way to increase liberty. We see it as a moral issue, we see it as a constitutional issue, and also, it’s a fiscal issue,” general counsel for Koch Industries Mark Holden said before the legislation was passed.