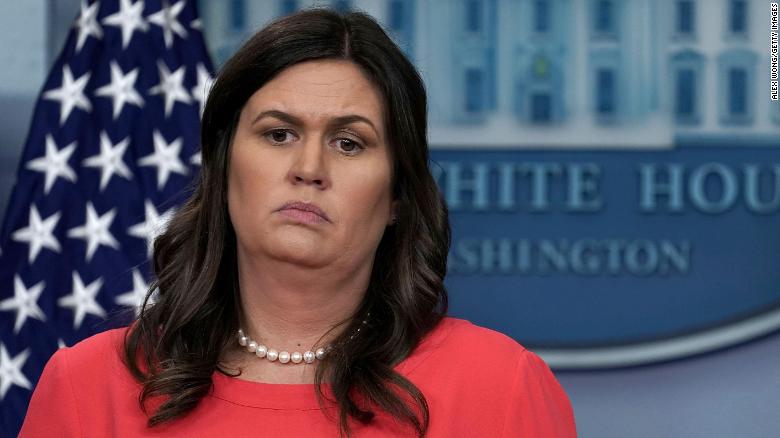 What on earth was the point of Sarah Sanders?

For 94 days, the outgoing White House press secretary gave no press briefing in the press room just a few steps from the press office that she nominally ran.

But the press did not stop pressing.

For more than three years, Sanders made no meaningful news on behalf of a boss who considers it his presidential priority to make as much meaningless news as possible.

Yet the news did not stop breaking.

With all the resources of the federal government’s communications machine at her fingertips, Sanders was the least resourceful communicator in Washington: a hapless and hopeless observer to every crisis, real or manufactured by the man sitting in the Oval Office, just down the hallway from her own.

In other words, she was the perfect spokeswoman for a perfectly lazy, untruthful president.

Sanders may have demonstrated few obvious qualities as a press secretary: she earned no trust from the media, possessed no information to share with the world and enjoyed no grasp of policy or even politics.

She had no special insights into Donald Trump’s thinking and no special relationship with him either. Other than this: her capacity to dodge responsibility and the truth were a polished mirror of his character.

Normal spokespeople would have been mortified by the revelations of Robert Mueller that, by Sanders’ own admission, she just made stuff up when she briefed the press.

Speaking the day after the president fired then FBI director James Comey, Sanders told the media that “countless members of the FBI” – representing what she called “the rank-and-file of the FBI” – had lost confidence in Comey. She claimed that this was the reason why Comey was fired, even though Trump himself would later tell NBC News that his decision was because of “this Russia thing”.

Sanders later admitted to Mueller that she fabricated the entire smear. “She also recalled that her statement in a separate press interview that rank-and-file FBI agents had lost confidence in Comey was a comment she made ‘in the heat of the moment’ that was not founded on anything,” Mueller stated in his report.

But who really needs credibility, a sense of shame or any degree of self-respect when you’re working for Trump?

Speaking to Fox News after the Mueller report destroyed what was left of her reputation, Sanders worked her way through a few more fabrications. “Look, I acknowledged that I had a slip of the tongue when I used the word ‘countless,’ but it’s not untrue,” she said.

That is some World Cup-quality lying. The single sentence includes at least three lies and there are only 21 words in it: an average of one lie for every seven words.

You don’t get to lie as well as that by chance or amateur skill. It takes dedication and effort on the training ground to make it look so easy and natural.

Which all makes the faux controversy about Michelle Wolf’s roasting of Sanders so very precious. Back in 2018, several otherwise sensible journalists rose nobly to defend Sanders after Wolf took apart the press secretary at the White House correspondents’ dinner.

“I actually really like Sarah,” Wolf said. “I think she’s very resourceful. Like, she burns facts and then she uses that ash to create a perfect smoky eye. Like, maybe she’s born with it. Maybe it’s lies. It’s probably lies.”

Noble-minded reporters thought this was mightily rude of a professional comedian, mentioning Sanders’ makeup in the same breath as her mendacity.

But that was before Mueller revealed that Sanders lied to all of them shamelessly about the biggest news about Comey.

That was before she told them all the Trump administration was doing “everything in our capacity” to care for children arriving at the border, as news broke of several of them dying in US custody.

It was also before she brashly claimed the Trump administration had made a historic recovery effort in Puerto Rico, after experts said as many as 5,000 Americans died there in the botched recovery after Hurricane Maria.

Other long-serving press secretaries have traditionally gone on to lucrative jobs in the private sector as spokespeople for large corporations and consultants advising powerful CEOs. But who in their right mind would want to give a communications job to such a poor communicator with so little credibility?

Trump himself tweeted that she was returning to her home state of Arkansas, suggesting she should run for governor, just like her father.

This would be abnormal for a former press secretary, but there was nothing normal about Sanders. If you can’t make a living lying to the media in public relations, you may as well lie to them as a candidate for public office.