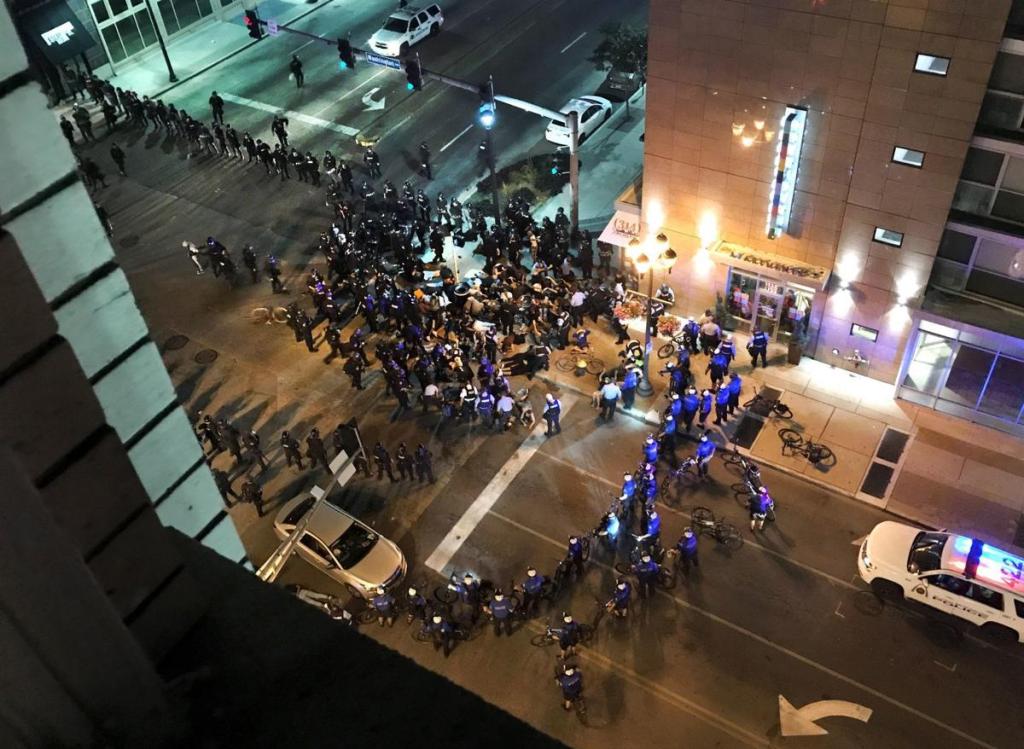 A St. Louis police officer is suing the city and the police department, claiming he was violently beaten by colleagues while working undercover during a protest.

Luther Hall’s lawsuit mirrors allegations made by federal prosecutors in the December indictment of four police officers. One officer pleaded guilty earlier this month to lying to the FBI. The other three have pleaded not guilty.

Hall was working undercover on Sept. 17, 2017, during a protest that followed the acquittal of former officer Jason Stockley, who is white, in the fatal shooting of a black suspect.

The lawsuit says the other officers named in the suit did not know Hall was a colleague. The suit says he was slammed to the ground, kicked and beaten.

A federal civil rights lawsuit filed by a St. Louis police officer who says that he was beaten by colleagues during a 2017 protest also says Mayor Lyda Krewson tossed off a flip comment about his “cute face” during an elevator ride and later denied knowing about the incident.

Detective Luther Hall’s lawsuit, filed Monday in U.S. District Court in St. Louis, also says that colleagues tried to cover up his beating. Hall’s suit says one officer who participated in the beating, Joseph Marcantano, has since been promoted to sergeant, showing that “misconduct is not only protected but rewarded by the City and Department.”

A mayoral spokesman said officials could not comment Tuesday because of the pending lawsuit. In a statement attributed to the mayor that was released to the Riverfront Times earlier, Krewson said she did not remember making any comment about Hall’s face. She said she was introduced to Hall by then-Chief Lawrence O’Toole, and saw some cuts on Hall’s face.

The allegations about Hall’s beating and arrest mirror many of those made by federal prosecutors in a December indictment of police officers Bailey Colletta, Randy Hays, Dustin Boone and Christopher Myers. Prosecutors say Hays, Boone and Myers beat Hall while arresting him without probable cause. Colletta pleaded guilty to a federal charge earlier this month and admitted lying to both a grand jury and the FBI about Hall’s arrest.

The other three officers have pleaded not guilty and their lawyers said earlier this year that they were headed to trial Dec. 2.

In her guilty plea, Colletta admitted that she and fellow officers of the Civil Disobedience Team ran into Hall downtown during a Sept. 17, 2017, protest, two days after the acquittal of former St. Louis police Officer Jason Stockley on a murder charge. The other officers believed Hall was a protester, and officers tackled him as he was following Colletta’s orders and getting to his knees, her plea says.

Hall’s lawsuit said that he was following protesters who had damaged windows and flowerpots when officers began firing bean bag rounds at the crowd and using pepper spray, despite a lack of justification for the use of force. Hall also did not hear an order for the crowd to disperse before force was used.

When Colletta and other officers arrived, Hall had his hands up and was getting on the ground, as ordered, when he was picked up and slammed down twice, the suit says. He was then kicked and beaten with batons and fists. Officers searched his backpack and destroyed his camera and cellphone, the suit says.

After a SWAT officer recognized Hall, he was treated at the scene of his arrest and again at a triage center. He was transported to the triage center and back to police headquarters by Krewson’s driver, the suit says. Krewson knew he was working undercover, and told him as they rode the elevator upstairs, “Oh they messed up your cute face,” the suit says. In public statements, Krewson supported officers’ actions that night, which included a mass arrest, the suit says. It says she also later denied knowing that an undercover officer had been beaten.

The lawsuit also says that no police report or other documents were prepared to document Hall’s arrest or the use of force, part of an effort to cover up the crime. It says the department has failed in the past to discipline white officers who commit misconduct against black officers.

Hall suffered multiple herniated discs, an injury to his lip and a jaw injury that made it difficult to eat. He has not returned to work.

Hall was one of more than 100 people arrested that night, and his suit is one of at least three filed against the city this week, just before the two-year anniversary of the Stockley protests and a state statute of limitations deadline.

The suit seeks unspecified damages for excessive force, failure to intervene, assault, false arrest, constitutional violations, civil conspiracy and other claims. It names the four charged officers as well as the city, Krewson, O’Toole and others.

Colletta could face at least 30 to 37 months in prison under federal sentencing guidelines, and prosecutors say she should face 46 to 57 months at her sentencing, set for Dec. 13.

There was no probable cause for Hall’s arrest, and he did not do anything to justify the use of physical force, Assistant U.S. Attorney Reginald Harris said in court at the time of Colletta’s plea.