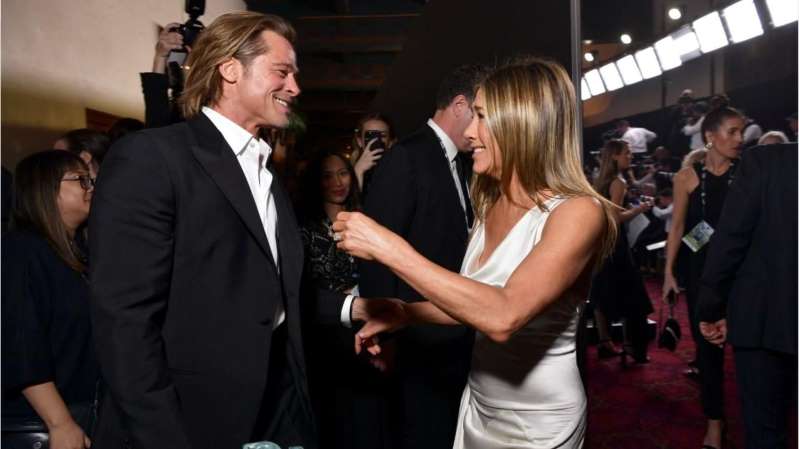 Jennifer Aniston turned heads in her hip-hugging white satin slip dress from Christian Dior by John Galliano at the SAG Awards. She and ex hubby, Brad Pitt were snapped backstage looking happy as ever as they reunited to talk about their respective SAG Award wins.

Now that we have your attention, perhaps you will be interested in knowing that in America, the greatest country in the world, over 12 million children live in households without enough food.

Think about that. For at least one minute.

The current meal regulations were established under the Healthy Hunger-Free Kids Act of 2010 spearheaded by Michelle Obama. That law set standards for school meals for students in grades K-12 to ensure children were receiving more vegetables, fruits, whole-grain rich foods, and fat-free milk. For example, the law required schools serve a set amount of a variety of vegetables that include both leafy greens and starchy plants.

But the Department of Agriculture argued the Obama-era rules were leading to high costs and rampant food waste. On Friday — Michelle Obama’s birthday — the department announced its proposal to change those rules.

However, the Department of Agriculture’s own research on the effects of the Obama-era rules undercuts this claim. In its 2019 “School Nutrition and Meal Cost Study,” the department found no dramatic changes in the amount of food waste, and also found compliance with the rules led to better participation rates in school meal programs.

Again, the facts are that the highly touted “food waste” is the same before and after the Healthy Hunger-Free Kids Act, so the real target of the Trump administration is the cost of providing nutritious food to children.

It follows that the Trump administration believes that massive tax cuts for the wealthy and to corporations are important, but providing healthy food to poor children is not important.

Make no mistake, children and families will suffer.

The cuts and changes in eligibility were framed as a way to save money. The Trump Administration said it needs to cut spending on food assistance to trim the budget. It apparently needs the extra money to whittle down the $1.7 trillion deficit created by 2017 tax cuts to the richest of the rich.

It’s a sad commentary on the priorities of the current administration.

Agriculture Secretary Sonny Perdue has argued that the changes will force able-bodied people to work in these times of low unemployment. But the facts suggest that low unemployment has not reduced the need for food programs.

Because while unemployment is low, the jobs available don’t pay a living wage.

Few would argue those who are able to work should do so to the best of their ability, but this policy just hurts people in need.

This administration and the Republicans that support them, continue to implement policies that make the wealthiest even wealthier, while taking away programs that support the lower and middle class.

Those are the facts.

Trump and his team do a great job in convincing many of the people those policies actually harm, that making the rich even richer, and eliminating school lunch, unemployment and food subsidy programs, will make America great again.

But if hungry children are upsetting to you, then take comfort that Jen and Brad had a picture-perfect moment together backstage at another of those the award shows that hand out such well-deserved honors to our nation’s rich and famous celebrities.