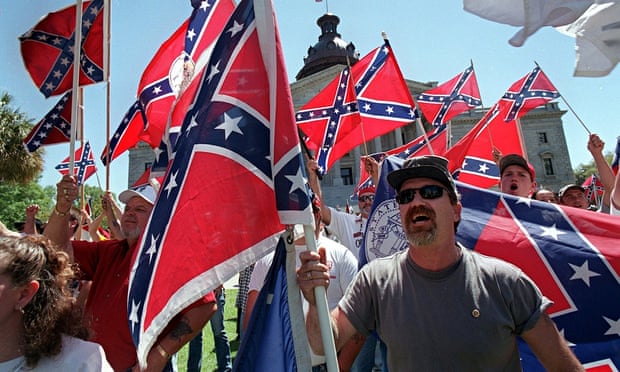 What appeared to be a noose had been found last month in the garage of Wallace, the top circuit’s only Black driver, after he had pushed for the organization to prohibit the Confederate flag at its contests and expressed support for the Black Lives Matter movement.

An FBI investigation concluded it was a pull-rope and did not consider Wallace the victim of a hate crime, though the rope in his garage was the only one found to have been fashioned in such a way and NASCAR President Steve Phelps defended the circuit’s “concern” for their driver. But Trump, nearly two weeks after the incident, is now baselessly accusing Wallace of perpetrating a “hoax.”

“Has [Wallace] apologized to all of those great NASCAR drivers & officials who came to his aid, stood by his side, & were willing to sacrifice everything for him, only to find out that the whole thing was just another HOAX?” Trump tweeted Monday. “That & Flag decision has caused lowest ratings EVER!”

The incident, of course, was not manufactured; Wallace had not been the one who found or reported the suspected hate crime, and while investigators concluded the rope had been in the garage since last year, before Wallace’s team was assigned to it, a photo showed the garage-pull was clearly styled as a noose.

Nevertheless, Wallace quickly became the subject of conspiracy theories suggesting he staged the incident; it took a couple weeks, but the unfounded theory now appears to have taken root in Trump’s addled brain, and become his latest racist attack on Black athletes he has long portrayed as ungrateful.

His tweet bashing Wallace—and expressing displeasure at the banishment of the Confederate flag that has sometimes been associated with the red state sport—comes as he makes a defense of the Confederacy a centerpiece of his lagging re-election campaign.

He’s vocally defended statues of Confederates and opposed changing the names of military bases honoring them, likening Democrats to fascists and accusing racial justice demonstrators of attempting to “erase our history.” It’s never been quite adequate to describe Trump’s racist overtures as “dog whistles”—the man has never in his life been subtle about anything, least of all his bigotries—but he has been increasingly overt of late, even approvingly tweeting out a video recently of a supporter yelling “white power.”

President Trump’s continued defense of monuments and institutions named in honor of Confederate figures puts him in opposition not only to his political opponents, who view monuments to Confederate soldiers as racist — but to most Americans, as well.

Trump’s statement that “we will not even consider” changing the names came three days after a spokesman for the U.S. Army said, “The secretary of the Army is open to having a bipartisan conversation regarding the renaming” of 10 Army bases named after Confederate generals who had served in the U.S. Army, the nation’s oldest service branch.

While attacking Sen. Elizabeth Warren (D-Mass.) in what many consider a slur against Native Americans, Trump tweeted Wednesday that he would veto any bill attempting to rename military bases named for Gen. Robert E. Lee and other military leaders of the Confederacy.

@realDonaldTrump
I will Veto the Defense Authorization Bill if the Elizabeth “Pocahontas” Warren (of all people!) Amendment, which will lead to the renaming (plus other bad things!) of Fort Bragg, Fort Robert E. Lee, and many other Military Bases from which we won Two World Wars, is in the Bill!

His die-hard base—the only people he’s ever even pretended to care about—might approve of all this, but it all puts him dramatically out of step with the nation he was elected to lead, a majority of which appear to welcome the reckoning over racism.

It’s not even clear that the majority of NASCAR fans share in his gripes about Wallace and the Confederate flag; despite his claims of plunging ratings, viewership has actually been on the upswing since racing returned in May.

Another NASCAR driver, Tyler Reddick, shot back Monday at Trump: “We don’t need an apology. We did what was right and we will do just fine without your support.”

And even one of Trump’s loyalists, Sen. Lindsey Graham, didn’t run with the president’s unprompted attack, saying Monday that Wallace doesn’t have to apologize.

“You saw the best in NASCAR,” Graham said of Wallace’s fellow drivers rallying behind him, adding, “I would be looking to celebrate that kind of attitude more than being worried about it being a hoax.”

And for those that forgot: The Confederate states seceded from the United States in 1861 and fought a bloody, unsuccessful four-year war against the Union states in an effort to maintain the institution of using enslaved black men, women and children to perform labor.

The Confederate flag was designed to represent a divided nation.

It was flown during the Civil War when 11 states — Alabama, Arkansas, Florida, Georgia, Louisiana, Mississippi, North Carolina, South Carolina, Tennessee, Virginia, Texas — broke from the nation to defend the practice of slavery.