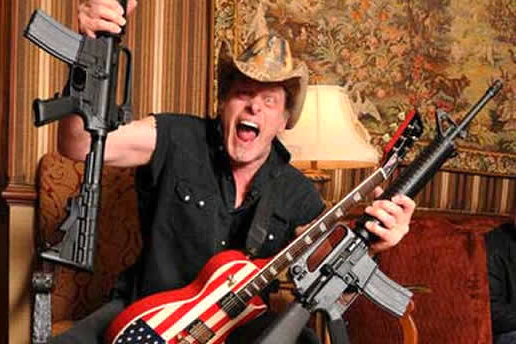 Ted Nugent — the proud gun-owner and washed-up rocker — has said some offensive things in the past, and not just while performing “Cat Scratch Fever.” In 2007, he said the following during a concert:

“Obama, he’s a piece of shit. I told him to suck on my machine gun. Hey Hillary [Clinton], you might want to ride one of these into the sunset, you worthless bitch.”

So that’s his level of political discourse. Of course, he seems to be speaking figuratively if distastefully. But he made another rather appalling statement at a NRA convention in St. Louis:

“If Barack Obama becomes the president in November, again, I will be either be dead or in jail by this time next year.”

“We need to ride onto that battlefield and chop their heads off in November.”

Again, it’s hard to take this as a literal threat of assassination against the president, but how else would Nugent have us understand it?

Then, responding to the recent events, Nugent fired back at critics of President Trump who accused him of passively accepting support of white supremacists by criticizing “all sides” in the Charlottesville violence.

“All lives matter and we condemn all violence,” Nugent said on Fox News. “If you don’t agree with that, you’re a racist,” he added.

Eboni Williams disagreed, saying that it “wasn’t all sides that drove a car into [victim] Heather Heyer.”

David Crosby and Nugent are in the midst of a social-media spat over Nugent’s claim that “political correctness” is keeping him out of the Rock and Roll Hall of Fame. Crosby has dismissed the Motor City Madman’s work as not good enough, while Nugent called the former Byrds star a “bloated chemical repository” in response.

Nugent fired the first shot last week when he accused Hall of Fame boss Jann Wenner of hating the Second Amendment and the NRA, of which Nugent is a board member.

“That’s the only reason I’m not in,” Nugent said. “And until they get their heads out of their ass, I’m more than happy to do what I do and do it with all the vim and vigor that I do it every night.” However, asked if he’d like to be inducted, he replied, “Hell, yes.”

Crosby got involved on Monday, when he was asked via Twitter whether he agreed with Nugent’s assessment, and replied: “No, the a–hole just isn’t good enough.” When it was later suggested that the classic track “Cat Scratch Fever” alone might earn Nugent an induction, Crosby said: “Nope.”